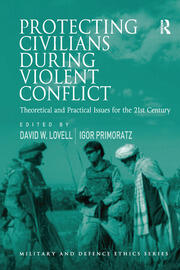 Protecting Civilians During Violent Conflict: Theoretical and Practical Issues for the 21st Century

There is almost unanimous agreement that civilians should be protected from the direct effects of violent conflict, and that the distinction between combatant and non-combatant should be respected. But what are the fundamental ethical questions about civilian immunity? Are new styles of conflict making this distinction redundant? Eloquently combining theory and practice, leading scholars from the fields of political science, law and philosophy have been brought together to provide an essential overview of some of the major ethical, legal and political issues with regard to protecting civilians caught up in modern inter- and intra-state conflicts. In doing so, they examine what is being done, and what can be done, to make soldiers more aware of their responsibilities in this area under international law and the ethics of war, and more able to respond appropriately to the challenges that will confront them in the field. 'Protecting Civilians During Violent Conflict' presents a clear-eyed look at the dilemmas facing regular combatants as they confront enemies in the modern battlespace, and especially the complications arising from the new styles of conflict where enemy and civilian populations merge.

David Lovell is Head of the School of Humanities and Social Sciences, at the University of New South Wales at the Australian Defence Force Academy , Australia and Igor Primoratz is Professorial Fellow at the Centre for Applied Philosophy and Public Ethics, Charles Sturt University, Canberra, and Professor Emeritus of Philosophy at The Hebrew University, Jerusalem

'As unconventional and intra-state conflict situations abound, this timely volume addresses the burgeoning and complex ethical problems posed by the risk of civilian casualties. If the moral claims of non-combatants are not absolute, how strong are they? Readers of this volume will gain a clear picture of the values at stake and the special difficulties of implementing them in the twenty-first century.' John Kleinig, John Jay College of Criminal Justice, USA