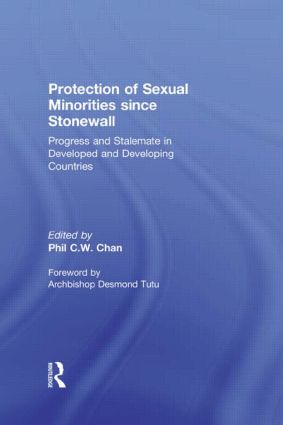 Protection of Sexual Minorities since Stonewall

Progress and Stalemate in Developed and Developing Countries, 1st Edition

The Stonewall Riot in New York in 1969 marked the birth of the sexual minority rights movement worldwide. In the subsequent four decades, equality and related rights on grounds of sexual orientation and gender identity have been enshrined in many African, Asian, Australasian, European and North American countries, thanks to better informed discourses of the natures of sexual orientation, gender identity, equality and rights that systematic scientific and socio-legal research has generated.

Discrimination, harassment and persecution on grounds of a person’s sexual orientation or gender identity, however, continue to pervade the laws and social norms in all developed and developing countries. In tribute to the courage of those who participated in the Stonewall Riot, this book examines the progress and stalemate in various countries on five continents, as well as in the development of international law, concerning the rights of persons belonging to sexual minorities. This book covers issues including homophobic bullying and gay–straight alliances in schools; the merits and problems that legislation prohibiting hate speech on grounds of sexual orientation presents; criminal justice systems in relation to male rape victims and to criminalisation of HIV exposure and transmission; the development of sexual minority rights, from historical and socio-legal perspectives, in Hong Kong, Japan, Singapore, and Zimbabwe; the lives of transgender persons in Asian countries; the evolution, operation and impact of international and domestic refugee laws on sexual orientation and gender identity as grounds for refugee status and asylum; and the conflicts between law, religion and sexual minority equality rights that inhere in the same-sex marriage debate in Ireland.

This book was previously published as a special double issue of The International Journal of Human Rights.

Phil C.W. Chan is currently Visiting Research Fellow at the University of Otago Faculty of Law, while completing his doctoral thesis on China and international law for examination at the National University of Singapore Faculty of Law. He has held visiting research positions at universities including Cambridge, Keele, St Andrews, ANU, Ottawa, Toronto, Freiburg and Vanderbilt.