Protest in the Long Eighteenth Century 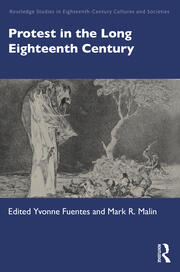 Protest in the Long Eighteenth Century

This edited collection of essays focuses on the topic of protest during the Enlightenment of the long eighteenth century (roughly 1670-1833).

Resistance in the eighteenth century was extensive, and the act of protest to foment meaningful societal change took on many forms from the circulation of ballads, swearing of oaths, to riots and work stoppages, or the composition of essays, novels, posters, caricatures, political cartoons as well as theater and opera. The contributors to this volume examine the causes of protest as well as the broad ways in which common artifacts such as poles, trees, drums, conchs, and songs acted as flashpoints for conflict and vehicles of protest. Rather than approaching the topic with strict geographical, temporal and structural limitations, this book focuses on the time period from an international perspective and an interdisciplinary scope.

Because of its wide scope, this book is an important contribution to the subject that will be of interest to both faculty and students of the history of protest, resistance and the changes that these forces bring as it also reminds us that the protests of today are rooted in historical resistances of the past.

They Were Warned, and yet They Persisted, by Yvonne Fuentes and Mark R. Malin

Part I: Obnoxious, Disorderly, and Defiant: Reaction and Counterreaction

"So Many People of all Sorts Rose in Opposition": Examining the Diversity of Participants in Colonial Crowd Action, by Molly Perry

"The Sovereign Right of Thinking": Opposition to the Alien and Sedition Acts in Song, by Laura Lohman

Liberty Poles and the Contested Right of Protest in America’s Founding Era, by Shira Lurie

The American Founders against Protest: Non-Violent Farmers, Political Theology, and the Fabrication of Shays’s Rebellion, by Barry Levy

Part II: The Rhetoric of Protest: The Imbrication of Literature and Social Protest

Staging Popular Protest in Eighteenth-Century Theater. The Case of Merope between Republicanism and Absolutism, by Enrico Zucchi

The Marquis de Sade and Twisted Political Protest, by Melissa A. Deininger

The Rhetoric of Protest in the Satirical Works of Cadalso and Jovellanos, by Matthieu P. Raillard

The Hancocks’ Tea Trade and Origins of the American Revolution, by Simon H. Sun

"The basis of Alienation will never be healed": The Historicity of Protest in Ezra Stiles’ Stamp Act Notebook, by Abby Chandler

"The War of Nullification": Imagining Disunion in South Carolina 1828-1833, by Brian Neumann

Hell is Over: Poetry and Protest in the Folksong Jarabe Gatuno in Eighteenth Century Mexico, by Elena Deanda-Camacho

Mark R. Malin is Professor Emeritus of Spanish at Randolph-Macon College. He has presented and published on eighteenth-century literature, with a particular interest in the novel and specifically the Spanish epistolary novel of the late eighteenth and early nineteenth centuries. Among other publications, he authored a critical edition of Estanislao de Cosca Vayo’s Voyleano, o exaltación de las pasiones (2007).