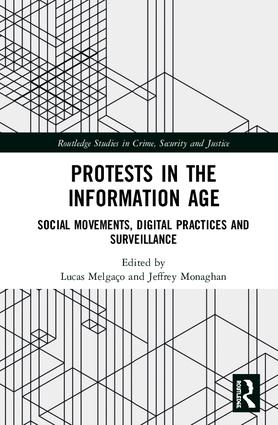 Protests in the Information Age

Information and communication technologies have transformed the dynamics of contention in contemporary society. Social networks such as Facebook and Twitter, and devices such as smartphones have increasingly played a central role in facilitating and mobilizing social movements throughout different parts of the world. Concurrently, the same technologies have been taken up by public authorities (including security agencies and the police) and have been used as surveillance tools to monitor and suppress the activities of certain demonstrators.

This book explores the complex and contradictory relationships between communication and information technologies and social movements by drawing on different case studies from around the world. The contributions analyse how new communication and information technologies impact the way protests are carried out and controlled in the current information age. The authors focus on recent events that date from the Arab Spring onwards and pose questions regarding the future of protests, surveillance and digital landscapes.

"This fresh and informative volume by young scholars who came of age as information technologies were significantly altering the ever dynamic landscapes of protest and response is most welcome! With clarity and insight, its contemporary case studies cross and fuse disciplinary and national borders, while respecting the complexity and sometimes irony of the topic. Should be in the library of anyone interested in technology, social movements and democracy."

- Gary T. Marx, Professor Emeritus MIT, author of Windows into the Soul: Surveillance and Society in an Age of High Technology

Introduction: Taking to the Streets in the Information Age (Lucas Melgaço and Jeffrey Monaghan)

Part I: Digital Practices as Part of Social Movement Repertoires of Contention

1. Mobilisation and Surveillance on Social Media: The Ambivalent Case of the Anti-Austerity Protests in Spain (2011-2014) (Manuel Maroto and Alejandro Segura)

6. Between Visibility and Surveillance. Challenges to Anti-Corporate Activism in Social Media (Julie Uldam)

Lucas Melgaço is an Assistant Professor at the Department of Criminology of the Vrije Universiteit Brussel (VUB), Belgium where he combines his background in geography with his specialization in surveillance, security and policing studies. He holds a doctorate degree in Geography from a partnership between the University of São Paulo (USP) and the University of Paris 1 – Panthéon Sorbonne. He has also worked on translating and introducing the theories of Brazilian geographer Milton Santos to the English-speaking community. Lucas is co-editor of the book Order and Conflict in Public Space (Routledge, 2016) and lead editor of the journal Criminological Encounters.

Jeffrey Monaghan is an Assistant Professor at Carleton’s Institute for Criminology and Criminal Justice, Canada. He has a PhD in Sociology from Queen's University, where he studied at the Surveillance Studies Centre. His research is focused on the surveillance of social movements with a focus on environmental and indigenous movements; knowledge construction practices associated with contemporary policing of ‘radicalization’; and domestic security governance in the context of the ‘war on terror'. His recent book, Security Aid (University of Toronto Press, 2017), examines the securitization of humanitarian aid. He lives in Ottawa, Canada.

Contemporary social scientific scholarship is being transformed by the challenges associated with the changing nature of, and responses to, questions of crime, security and justice across the globe.  Traditional disciplinary boundaries in the social sciences are being disturbed and at times broken down by the emerging scholarly analysis of both the increasing merging of issues of ‘crime’ and ‘security’ and the unsettling of traditional notions of justice, rights and due process in an international political and cultural climate seemingly saturated by, and obsessed with, fear, insecurity and risk.  This series showcases contemporary research studies, edited collections and works of original intellectual synthesis that contribute to this new body of scholarship both within the field of study of criminology and beyond to its connections with debates in the social sciences more broadly.