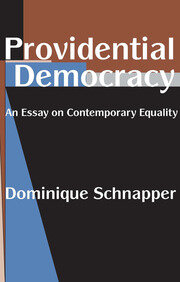 Democracy posits the universality of the equality principle: a community of citizens is governed by the principle of the formal equality of all individuals, whatever their real social, cultural, or other inequalities. Democratization, on the other hand, is motivated by the ambition of ensuring the real equality of citizens, and not simply their formal equality. The dynamics of democracy are thus insured by the development of a welfare state that increasingly intervenes in order to satisfy the social and economic needs of individuals. Especially focused on France, yet informed by the experiences of other European countries, this book examines the dilemmas of the search for equality in society and politics.

Democratization guarantees the rights of salaried workers and employees, the rights to material survival and housing, as well as health care, education, and culture. Today, however, as Schnapper observes, its action has become paradoxical. As the fruit of a praiseworthy concern to ensure the universality of rights, what Schnapper identifies as a "Providence State" now aims, by means of positive discrimination and other specific promotion policies, to defend the particular rights of certain categories of individuals. The action of the Providence State thus nourishes an aspiration: that the identities of historical collectivities gathered within the same national society be publicly recognized, and that these have rights. Equity thus supplants equality; and multiculturalism, universality. Such is the ordeal currently experienced by Western democracies, which are faced with the increasingly "providential" nature of their societies. Indeed, the author asks, how can a united political Europe be constructed on the ideals and institutions of citizenship, when European nations are becoming providential democracies?

Providential Democracy offers a searching and timely critique of democratization that will be of interest to sociologists, political scientists, and historians.