Psychoanalysing Ambivalence with Freud and Lacan
On and Off the Couch 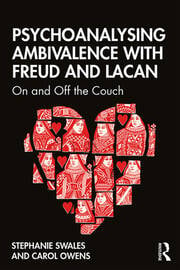 Psychoanalysing Ambivalence with Freud and Lacan: On and Off the Couch

Taking a deep dive into contemporary Western culture, this book suggests we are all fundamentally ambivalent beings. A great deal has been written about how to love –  to be kinder, more empathic, a better person, and so on. But trying to love without dealing with our ambivalence, with our hatred, is often a recipe for failure. Any attempt, therefore, to love our neighbour as ourselves –  or even, for that matter, to love ourselves – must recognise that we love where we hate and we hate where we love.

Psychoanalysis, beginning with Freud, has claimed that to be in two minds about something or someone is characteristic of human subjectivity. Owens and Swales trace the concept of ambivalence through its various iterations in Freudian and Lacanian psychoanalysis in order to question how the contemporary subject deals with its ambivalence. They argue that experiences of ambivalence are, in present-day cultural life, increasingly excised or foreclosed, and that this foreclosure has symptomatic effects at the individual as well as social level. Owens and Swales examine ambivalence as it is at work in mourning, in matters of sexuality, and in our enjoyment under neoliberalism and capitalism. Above all, the authors consider how today’s ambivalent subject relates to the racially, religiously, culturally, or sexually different neighbour as a result of the current societal dictate of complete tolerance of the other. In this vein, Owens and Swales argue that ambivalence about one’s own jouissance is at the very roots of xenophobia.

Peppered with relevant and stimulating examples from clinical work, film, television, politics, and everyday life, Psychoanalysing Ambivalence breathes new life into an old concept and will appeal to any reader, academic, or clinician with an interest in psychoanalytic ideas.

Carol Owens, Ph.D., is a psychoanalyst and psychoanalytic scholar in Dublin, Ireland. She edited The Letter: Perspectives in Lacanian Psychoanalysis (2003–2008), Lacanian Psychoanalysis with Babies, Children and Adolescents: Further Notes on the Child (with Farrelly Quinn, Routledge, 2017) and Studying Lacan’s Seminars IV and V: From Lack to Desire (with Nadezhda Almqvist, Routledge, 2019). She is the series editor for the newly establishedRoutledge series, Studying Lacan’s Seminars.

Stephanie Swales, Ph.D. is an Assistant Professor of Psychology at the University of Dallas, USA, a practicing psychoanalyst, a licensed clinical psychologist, and a clinical supervisor located in Dallas, Texas. Her first book, Perversion: A Lacanian Psychoanalytic Approach to the Subject, was published by Routledge in 2012.

"Covering everything from Aristotle to zombies to Breaking Bad, Carol Owens and Stephanie Swales have written a masterpiece unlocking the secrets of ambivalence. In Psychoanalysing Ambivalence with Freud and Lacan, they demonstrate that ambivalence is perhaps the central category in social relations. The need for this book is especially urgent today, in an era characterised by its various ways of refusing ambivalence, which are, Owens and Swales make clear, ways of refusing the price of interacting with others altogether. Psychoanalysing Ambivalence with Freud and Lacan speaks to the contemporary political catastrophe better than any book I’ve read." –Todd McGowan, Professor, University of Vermont, USA

"Exceptionally wide-ranging, deeply learned and laugh-out-loud funny, this book demonstrates how much psychoanalysis still has to offer when it comes to destabilising our contemporary glorification of strong, stable, and unequivocal rationalities. Yet for all its insistence on the inexorability of ambivalence, there is absolutely no reason for anyone to feel ambivalent about what Swales and Owens have done. Feel confident, stand firm and commit yourself wholeheartedly to this book. You shall be rewarded with countless redemptive questions about all that is dear to you." --Dany Nobus, Professor of Psychoanalytic Psychology, Brunel University London

In 1958, Lacan claimed hat many of us "have in our presence someone who […] is truly dead, and has been for some time, dead and mummified […]. Being half-dead is perhaps far more prevalent than we think […]. Isn’t it true that the part of every living being that is half-dead does not leave us a perfectly clear conscience? […] [We defend against] what is half-dead in us, too." Was he, in fact, already talking about the ever-more-ubiquitous zombies that Owens and Swales convincingly associate with our own increasingly unrecognized ambivalence? Reader beware: the dead, the un-dead, vampires, and myriad other uncanny creatures of the contemporary silver screen and television crawl out of the pages of this book, reminding us of those things we’d rather not know about ourselves. Things—including hatred of our neighbour, prejudice, and jealousy—that, as the authors persuasively argue, we are no longer supposed to feel, much less express! Why should we be surprised when they reappear in other forms and contexts? —Bruce Fink, Lacanian psychoanalyst