Psychoanalysis and Religion in the 21st Century
Competitors or Collaborators? 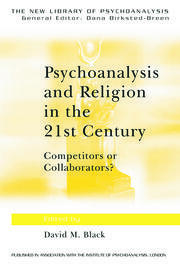 Psychoanalysis and Religion in the 21st Century: Competitors or Collaborators?

What can be gained from a dialogue between psychoanalysis and religion?

Freud described religion as the universal obsessional neurosis, and uncompromisingly rejected it in favour of "science." Ever since, there has been the assumption that psychoanalysts are hostile to religion. Yet, from the beginning, individual analysts have questioned Freud's blanket rejection of religion.

In this book, David Black brings together contributors from a wide range of schools and movements to discuss the issues. They bring a fresh perspective to the subject of religion and psychoanalysis, answering vital questions such as:

Psychoanalysis and Religion in the 21st Century will be of great interest to psychoanalysts, psychoanalytic therapists, psychodynamic counsellors, and anyone interested in the issues surrounding psychoanalysis, religion, theology and spirituality.

David M. Black is a Fellow of the Institute of Psychoanalysis, London, and works as a psychoanalyst in private practice and teaches on a number of professional trainings.  He has published widely on psychoanalysis in relation to religion, consciousness and values.

"What makes this book remarkable is the even-handed nature of the discussion and the wide variety of standpoints from which the 14 contributors approach their chosen topics ... this collection is packed with stimulating contributions." - Christopher MacKenna, British Association of Psychotherapists, London

"David Black has gathered together a selection of profound and important writings on religious faith and psychoanalysis. It is a contribution to our thinking that I warmly welcome and recommend." - Jonathan Wyatt, Psychodynamic Practice, November 2007