Psychoanalysis in Transition
A Personal View 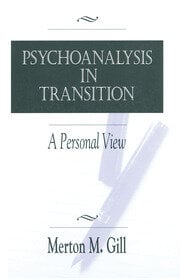 Psychoanalysis in Transition: A Personal View

Constructivism and Hermeneutics. The Internal and External. One-Person and Two-Person Psychology. Neutrality. Psychoanalysis and Psychotherapy. Free Association and the Analytic Process. What Analysts Say and Do. Theory and Technique. The Body in Psychoanalysis. Conclusion.

"For those of us who grew up in the psychoanalysis of the 60s and 70s, Merton Gill's formulation of psychoanalytic theory was psychoanalytic theory - the definitive statement.  Much has happened in psychoanalysis since that time - the challenge to metapsychology, the expansion of object relations approaches, the development of self psychology, the reformulation of transference and countertransference, and the debates about hermeneutics, constructivism, and one-person and two-person psychologies.  Merton Gill has been central in these dialogues, bringing his familiar scholarship, clarity of thought, and commitment to balanced and open-minded exploration of new ideas to discussions that were so often obscured by ideological prejudices and religious convictions.  In the process Gill's views have evolved; indeed his own contributions from the past are often the strongest arguments that can be raised against his new ideas.  He has become far more focused on the clinical process - psychoanalytic theory as a tool for the analyst at work.  He is far more sensitive to the patient's experience - the analyst and the analytic process are not what the theory dictates or the analyst believes they are, but rather what the analyst and the patient make of them.  He is, above all, committed to analyzing, to the continued and repeated exploration of the analytic interaction.  His latest volume is about what interests him the most - 'the nature of psychological therapy informed by psychoanalytic concepts.'  In it, he once again demonstrates that his is one of the most youthful minds in contemporary psychoanalysis."

"It is astounding how many different problems Gill is able to engage in an illuminating fashion in this slim volume. He continually plays off dialectical tensions between competing positions to explore the subtle, interactive relationships between: the internal and the external, one-person and two-person frameworks, and drives and object relations.  .  .  .  The psychoanalytic world is not soon likely to benefit from a mind and a spirit as incisive and intellectually passionate as Merton M. Gill's."