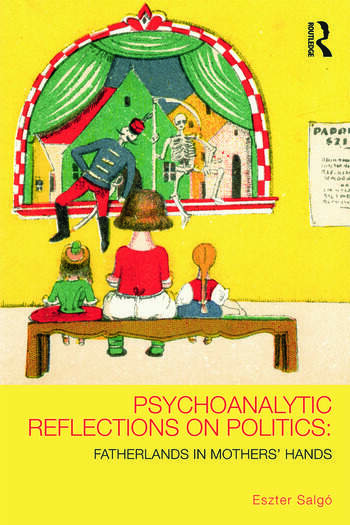 Psychoanalytic Reflections on Politics: Fatherlands in mothers’ hands is a playful exploration of how people’s desires, fantasies, and emotions shape political events and social phenomena. It highlights the mythical sources of today’s political projects, the power of political imagination, and the function of symbolism in political thought. Eszter Salgó argues that the driving force for the formation of political communities is fantasy – ‘illusions’ in a Winnicottian sense, ‘phantasies’ in a Lacanian sense, ‘phantoms’ as described by Nicolas Abraham and Maria Torok, and ‘dreams’ as interpreted by Sándor Ferenczi. She introduces the metaphor of the ‘fantastic family’ as a symbolic representation of political communities, both to reflect on people’s deeply felt desire to find in public life the resolution, love, and wholeness of early childhood, and to unveil the political elite’s readiness to don the mask of the ‘ideal parent’.

The book is divided into two parts. The first part of the book explores the theories of Donald Winnicott and Jacques Lacan: the matrimony on the stage of politics between the ‘good-enough mother’ and the Symbolic Father which inaugurates the story of democracy’s ‘fantastic family’. The second part presents the ‘fantastic families’ of selected countries such as Hungary, Italy, and the world community to explain the proliferation of cosmogony projects, and to document the failure of the political elites to offer a satisfactory performance of their maternal and paternal functions.

Psychoanalytic Reflections on Politics: Fatherlands in mothers’ hands presents a new way of considering the art of politics, based on the understanding that people perceive reality through imagination and unconscious fantasy. It will be of interest to psychoanalysts, and academics from across the disciplines of politics, psychology, anthropology, sociology, philosophy, literature, and art.

Eszter Salgó teaches at the Department of International Relations at the American University of Rome.

"Salgó's powerful study - it will take your breath away." - Frank Furedi, Emeritus Professor of Sociology, University of Kent, Canterbury