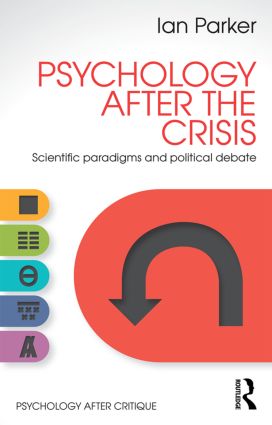 Psychology After the Crisis

Ian Parker has been a leading light in the fields of critical and discursive psychology for over 25 years. The Psychology After Critique series brings together for the first time his most important papers. Each volume in the series has been prepared by Ian Parker, features a newly written introduction and presents a focused overview of a key topic area.

Psychology After the Crisis is the first volume in the series and addresses three important questions:

The first two chapters of the book describe the way critical psychology emerged in Britain during the 1970s, and introduce four key theoretical resources: Marxism, Feminism, Post-Structuralism and Psychoanalysis. The chapters which follow consider in depth the critical role of Marxist thinking as an analytic framework within psychology. Subsequent chapters explore the application and limitations of critical psychology for crucial topics such as psychotherapy, counselling and climate change. A final chapter presents an interview which reviews the main strands within critical psychology, and provides an accessible introduction to the series as a whole.

Psychology After the Crisis is essential reading for students and researchers in psychology, sociology, social anthropology and cultural studies, and for discourse analysts of different traditions. It will also introduce key ideas and debates in critical psychology for undergraduates and postgraduate students across the social sciences.

'This series is the comprehensive resource we have been waiting for to enable new generations of budding psychologists, and all those who concern themselves with how we might live, to find their way to a just appreciation of what it might be to understand the myriad ways a human being can be a person among persons.' – Rom Harré, Linacre College, University of Oxford, UK, and the Psychology Department, Georgetown University, USA

‘This volume usefully brings together a diverse range of previously published influential papers from a unique, provocative and inspiring voice in critical psychology. The focus is on critical trends in theory and method following the ‘crisis’ in psychology, with Parker reiterating the value of Marxism, Feminism, Poststructuralism and Psychoanalysis throughout, while also highlighting various risks, traps and limits to apparently critical projects (e.g. discourse analysis). A highly recommended collection from a leading international scholar-activist.' – Brendan Gough, School of Social, Psychological & Communication Sciences, Leeds Metropolitan University, UK

‘Written with both humility and great insight, Professor Ian Parker's book describes how the failed paradigm revolution in mainstream psychology has resulted in a movement called ‘critical psychology’. Parker offers an elegant analysis and critique of the assumptions that ground both mainstream psychology and critical responses to it. This book will appeal to both students new to the field of critical psychology and more seasoned readers—it is accessible, engaging, and a philosophically grounded call to action.’ – Lisa Cosgrove, Edmond J. Safra Center for Ethics, Harvard University, and College of Education and Human Development, University of Massachusetts-Boston, USA

Ian Parker was Co-Founder and is Co-Director (with Erica Burman) of the Discourse Unit. He is a member of the Asylum: Magazine for Democratic Psychiatry collective, and a practising psychoanalyst in Manchester. His research and writing intersects with psychoanalysis and critical theory. He is currently editing a book series Lines of the Symbolic (on Lacanian psychoanalysis in different cultural contexts) for Karnac Books. He edited the 2011 four-volume Routledge major work Critical Psychology, and is editing the series Concepts for Critical Psychology: Disciplinary Boundaries Re-Thought. His books on critical perspectives in psychology began with The Crisis in Modern Social Psychology, and How to End It (Routledge, 1989), and continued with Discourse Dynamics: Critical Analysis for Social and Individual Psychology (Routledge, 1992). His recent books include Qualitative Psychology: Introducing Radical Research (Open University Press, 2005) and Revolution in Psychology: Alienation to Emancipation (Pluto Press, 2007).

This series brings together arguments for critical conceptual and methodological approaches in psychology. Edited by Ian Parker, a key protagonist in the ‘crisis’ debates and the development of radical work in qualitative research, discourse analysis, deconstruction and psychoanalysis, the books together set out the basis for understanding why contemporary ‘critical psychology’ is so important and what its limitations are.