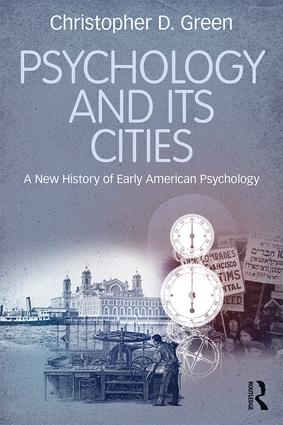 Psychology and Its Cities

Within the social and political upheaval of American cities in the decades surrounding the turn of the 20th century, a new scientific discipline, psychology, strove to carve out a place for itself. In this new history of early American psychology, Christopher D. Green highlights the urban contexts in which much of early American psychology developed and tells the stories of well-known early psychologists, including William James, G. Stanley Hall, John Dewey, and James McKeen Cattell, detailing how early psychologists attempted to alleviate the turmoil around them. American psychologists sought out the daunting intellectual, emotional, and social challenges that were threatening to destabilize the nation’s burgeoning urban areas and proposed novel solutions, sometimes to positive and sometimes to negative effect. Their contributions helped develop our modern ideas about the mind, person, and society. This book is ideal for scholars and students interested in the history of psychology.

"Professor Chris Green has given us a richly contextualized history of the early years of the development of American psychology. He weaves together fascinating biographical information with the social histories of New York, Boston/Cambridge, Chicago, and Baltimore to illustrate how key figures were influenced by the settings they lived and worked in. The result is a veritable moveable feast."

"Green’s insightful focus on the ‘socio-economic environment in which American psychology took root’ in the Gilded Age well demonstrates that this milieu ‘was the sea in which psychology swam.’ His book thus presents an exciting new perspective that does make for the ‘New History of American Psychology’ his subtitle promises."

"Leading historian of psychology Chris Green has written an exceptional and lucid account of the reciprocal influences of late 19th and early 20th century American psychology and its urban settings. This is a refreshing and unusual treatment of disciplinary context too often and easily overlooked."

"Congratulations! Written with the page-turning, engaging style of a brilliant professional historian, and obsessively footnoted and profusely documented, this book presents a unique and innovative perspective on the profound influences of rapidly changing cities on the development of early American psychology."

Chapter 7. The Formation of Psychology’s "Schools"

Chapter 8. Psychology in New York and Boston in the 1890s

Chapter 9. The Dawn of the 20th Century

Chapter 10. Psychology on the Public Stage