Public Discourses and Attitudes in Greece during the Crisis
Framing the Role of the European Union, Germany and National Governments 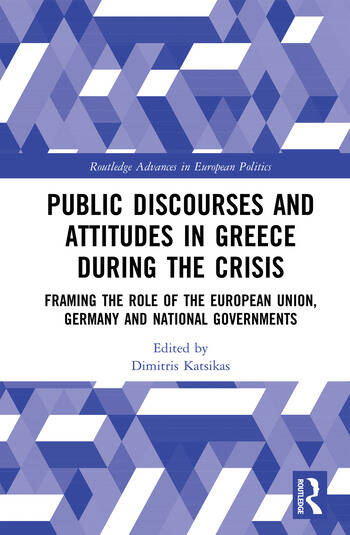 Public Discourses and Attitudes in Greece during the Crisis: Framing the Role of the European Union, Germany and National Governments

This book presents the findings of new empirical research regarding shifts in public discourses and attitudes in Greek society as a result of the crisis.

These findings have shown different shades of Euroscepticism and anti-German sentiments, but they have also revealed a normative conflict within Greek society itself. The book shows how economic crises and strict policy conditionality, causing or deepening economic recession in the countries receiving it, has the potential to set in motion a fragmentation process, which transcends standard material stratification and relates to broader political and even cultural rifts among the population. With this, the book serves as a case study of the impact of wider pressures and shifts weighing upon the European Union (EU) and the way European societies perceive the integration process.

This text will be of key interest to scholars and students of EU politics, Greek and Southern European studies and more broadly to cultural and comparative politics and political economy and European politics.

1. The Elusive Consensus of a Society in Crisis

2. ‘It's not the austerity, stupid’: Interpreting the frames of the far-right wing radicalization

3. Greek Elites’ Attitudes about the Crisis

4. Framing the Sacred: Separation Panic as the Main Frame of the European Union during the July 2015 Referendum in Greece

7. Framing the Crisis in Greece

Dimitris Katsikas is assistant professor at the National and Kapodistrian University of Athens and head of the Crisis Observatory at the Hellenic Foundation for European and Foreign Policy (ELIAMEP), Greece.