Pulsed laser–based techniques for depositing and processing materials are an important area of modern experimental and theoretical scientific research and development, with promising, challenging opportunities in the fields of nanofabrication and nanostructuring. Understanding the interplay between deposition/processing conditions, laser parameters, as well as material properties and dimensionality is demanding for improved fundamental knowledge and novel applications.

This book introduces and discusses the basic principles of pulsed laser–matter interaction, with a focus on its peculiarities and perspectives compared to other conventional techniques and state-of-the-art applications. The book starts with an overview of the growth topics, followed by a discussion of laser–matter interaction depending on laser pulse duration, background conditions, materials, and combination of materials and structures. The information outlines the foundation to introduce examples of laser nanostructuring/processing of materials, pointing out the importance of pulsed laser–based technologies in modern (nano)science.

With respect to similar texts and monographs, the book offers a comprehensive review including bottom-up and top-down laser-induced processes for nanoparticles and nanomicrostructure generation. Theoretical models are discussed by correlation with advanced experimental protocols in order to account for the fundamentals and underline physical mechanisms of laser–matter interaction. Reputed, internationally recognized experts in the field have contributed to this book.

In particular, this book is suitable for a reader (graduate students as well as postgraduates and more generally researchers) new to the subject of pulsed laser ablation in order to gain physical insight into and advanced knowledge of mechanisms and processes involved in any deposition/processing experiment based on pulsed laser–matter interaction. Since knowledge in the field is given step by step comprehensively, this book serves as a valid introduction to the field as well as a foundation for further specific readings.

Ion N. Mihailescu is university professor and senior scientific researcher, 1st degree, at the National Institute for Lasers, Plasma and Radiation Physics (www.inflpr.ro), Romania. He graduated from the University of Bucharest Faculty of Physics, Romania, in 1969 after majoring in nuclear physics and optics, spectroscopy, and plasma physics and received his PhD from the Central Institute of Physics, Bucharest, Romania, in 1982. He has a large experience in laser interactions, lasers and plasma physics, nanostructured thin-film technology, nanopowder generation and characterization, surface physics and engineering, laser spectroscopy, and materials processing by advanced laser technologies. He is the author of 441 publications, 195 scientific papers published in Proceedings of International Conferences, and 20 books and monographs and has 12 patents. Dr. Mihailescu is the first recipient (1994) of the Galileo Galilei award for "outstanding contribution in the field of optics" and Doctor Honoris Causa of University Cergy-Pontoise, France (2015).

is professor at the Physics Department "E. De Giorgi" of the University of Salento, Italy. She received her PhD in physics from the University of Modena and Reggio Emilia, Italy, in 2000. Her principal activities involve the study of laser–matter interaction for the deposition of thin films and nanoparticles by laser ablation for applications in sensors, optoelectronic devices, and solar cells. Particular attention is also devoted to the study of the matrix-assisted pulsed laser evaporation process for the deposition of organic films, polymer multilayers, nanomaterials, and composite films. She is the author of more than 120 publications in peer-reviewed international journals and 6 book chapters and has 2 patents. She has also served as a conference co-chair and committee member for international conferences in laser–matter interactions and applications. 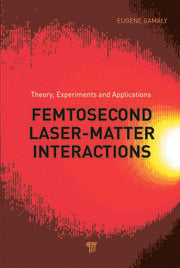