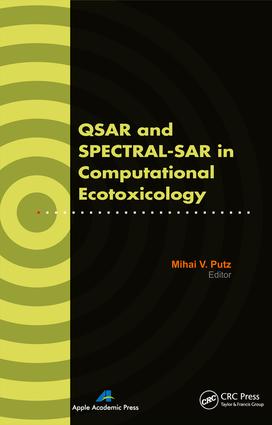 QSAR and SPECTRAL-SAR in Computational Ecotoxicology

QSAR and SPECTRAL-SAR in Computational Ecotoxicology presents a collection of studies based on the epistemological bulk data-information-knowledge of the chemicals used in green chemistry. It assesses a specific model of pattern characterization of concerned active substances at the bio-, eco-, and pharmacologic levels through unitary formulation o

Mihai V. Putz is a laureate in physics (1997), with an MS degree in spectroscopy (1999), and PhD degree in chemistry (2002), with many post doctorate stages: in chemistry (2002-2003) and in physics (2004, 2010, 2011) at the University of Calabria, Italy, and Free University of Berlin, Germany, respectively. He is currently Associate Professor of theoretical and computational physical chemistry at West University of Timisoara, Romania. He has made valuable contributions in computational, quantum, and physical chemistry through seminal works that appeared in many international journals. He is actively promoting a new method of defining electronegativity, DFE (Density Functional Electronegativity), among new enzyme kinetics (Logistic Enzyme Kinetics), and of new structure-activity relationship (SPECTRAL-SAR) model for a unitary quantum approach of the chemical reactivity targeting the bio-, pharmaco-and ecological analytical description.

Recently, he is Editor-in-Chief of the International Journal of Chemical Modelling and the International Journal of Environmental Sciences. He is member of many professional societies and has received several national and international awards from Romanian National Authority of Scientific Research (2008), the German Academic Exchange Service DAAD (2000, 2004, 2011) and the Center of International Cooperation of Free University Berlin (2010). He is the leader of the Laboratory of Computational and Structural Physical Chemistry at Chemistry Department of West University of Timisoara, Romania, where he conducts research in the fields of quantum chemistry and quantitative-structure activity relationships (QSAR). In 2010 Mihai V. Putz was declared through a national competition the Best Researcher of Romania.