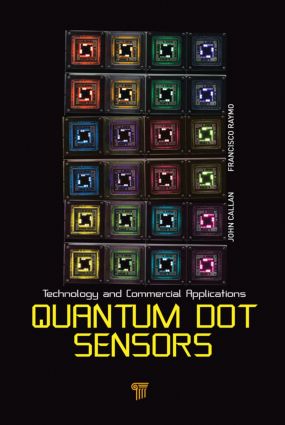 Consisting of six chapters, written by experts in their field, this book charts the progress made in the use of quantum dots as the signaling component in optical sensors since their discovery in the early 1980s. In particular, it focuses on CdS-, CdSe-, and CdTe-type QDs due to their emission in the visible region of the electromagnetic spectrum. The book begins by detailing the range of methods currently used for the preparation and passivation of core/core–shell quantum dots and follows with a discussion on their electrochemical properties and potential toxicity. The book culminates by focusing on how electron and energy transfer mechanisms can be utilized to generate a range of quantum dot-based probes. This is the first text of its kind dedicated to quantum dot-based sensors and will appeal to those readers who have an interest in working with these versatile nanoparticles.

"This book provides very interesting insights into quantum dots technology, discussing, with adequate detail, the distinct synthetic approaches and functionalisation strategies, the importance of surface passivation and modification to guaranteeing suitable stability, biocompatibility, and reactivity, and the effect of the size, shape, and composition of quantum dots on their unique photochemical properties. … The chapters are attractively organised, and all reviewed topics are meticulously referenced. Although accessible for beginners, this book could also be very useful for experienced researchers, because it clearly emphasises crucial aspects of the material presented and avoids redundant description."

John F. Callan received his BSc (Hons) in 1995 and PhD in chemistry in 1999 from the Queens University of Belfast (QUB), Northern Ireland. After working in the pharmaceutical industry for four years, he returned to QUB in 2003 to undertake a postdoctoral appointment in the lab of Prof AP de Silva. He was appointed lecturer in pharmaceutical chemistry at Robert Gordon University in Aberdeen, Scotland, in 2004 and senior lecturer in pharmaceutical science at the University of Ulster, Northern Ireland, in 2009, where he was promoted to reader in 2010. His research interests include the use of quantum dots in fluorescent sensing and photodynamic therapy applications, an area in which he has more than 30 publications.