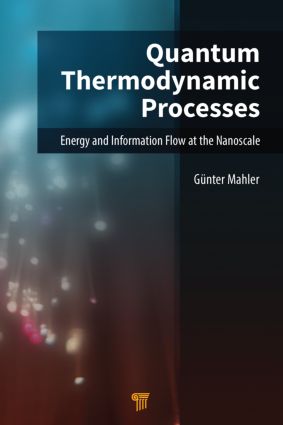 Energy and Information Flow at the Nanoscale, 1st Edition

Why does the world around us typically look thermal—from cosmology down to individual embedded spins? Do informational measures constitute additional (independent) parameters beyond physical ones? Is the transition between mechanical and thermal systems gradual or discontinuous? Pertinent examples can be found in various processes implemented on small quantum systems. Particularly attractive are model systems that can be treated thermodynamically, but—to some extent—also exactly, that is, based on pure quantum dynamics. This possibility opens the door to nano-thermodynamics. In this sense, the book aims at a modern perspective of nanoscale applications, defined here as a potential realization of various functions as constrained by given resources.

"This book of Günter Mahler, an early contributor to the field of quantum thermodynamics, comes at the right time to provide insights into this exciting field at the intersection of information theory, quantum mechanics, and statistical mechanics."

"This interesting book by one of the pioneers of quantum thermodynamics provides an in-depth discussion of two main statistical theories (information theory and quantum mechanics) and relates them to the major macroscopic theory, viz. thermodynamics. The presentation is based on ‘big questions,’ issues that drive the foundation research and can eventually display the very limits of studied theories. Thus this book not only describes the existing results, but also tends to guide the future research."

Günter Mahler obtained his doctorate in theoretical physics in 1972 and habilitation in theoretical physics in 1977 from the University of Regensburg, Germany. Since 1978, he was professor of theoretical physics at Institut für Theoretische Physik I, Universität Stuttgart, Germany, from where he retired in 2011. From 2004 to 2010, he was dean for international studies at the Faculty of Mathematics and Physics, Universität Stuttgart. Prof. Mahler’s research interests include quantum system theory, quantum stochastics, quantum networks, quantum control, quantum measurement and sensorics, quantum information processing, quantum thermodynamics and quantum transport, and quantum thermodynamical machines.