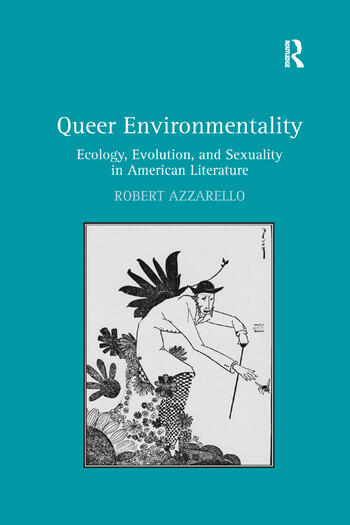 Offering a model for meaningful dialogue between queer studies and environmental studies, Robert Azzarello's book traces a queer-environmental lineage in American Romantic and post-Romantic literature. Azzarello challenges the notion that reading environmental literature is unsatisfying in terms of aesthetics and proposes an understanding of literary environmentalism that is rich in poetic complexity. With the term "queer environmentality," Azzarello points towards a queer sensibility in the history of environmental literature to balance the dominant narrative that reading environmental literature is tantamount to witnessing a spectacular dramatization of heterosexual teleology. Azzarello's study treats four key figures in the American literary tradition: Henry David Thoreau, Herman Melville, Willa Cather, and Djuna Barnes. Each of these writers problematizes conventional notions of the strange matrix between the human, the natural, and the sexual. They brilliantly demonstrate the ways in which the queer project and the environmental project are always connected or, put another way, show that questions and politics of human sexuality are always entwined with those associated with the other-than-human world.

'In Queer Environmentality, Robert Azzarello combines an environmental/evolutionary emphasis with selected elements of queer theory to re-situate texts by Thoreau, Melville, Cather and Barnes, and the resulting readings are dazzling. In a nuanced and sophisticated analysis, he demonstrates not only the ethical and aesthetic potentials of queer environmentality, but also its historical roots in texts considered canonical to ecocritical and queer scholarship.' --Catriona Sandilands, York University

'The book will be useful to anyone working in the emerging field of queer ecology. Lengthily assessing longstanding conflicts between eco-critics and practitioners of queer studies, Azzarello situates them in the philosophical debate between constructivism and objectivism... Azzarello’s book rightly springs from questions about the relationship between knowing, being, and ethics, and we will surely see such questions re-examined many times as the field beings to develop.' --NBOL-19

'Queer Environmentality is a stimulating example of queer ecocritical scholarship and a provocative starting point for future work.' --Interdisciplinary Studies in Literature and Environment

'Queer Environmentality is an openly theoretical book that is carefully argued, and it will likely find a ready audience among ecocritics interested in the type of questions that it raises.' American Studies

'Azzarello works to justify queer environmentality as its own epistemology. While Azzarello does not need to convince me of the value of queer ecocritical readings, I am pleased to note that the rigor and thoroughness, both philosophical and critical, present in Queer Environmentality does its work to help legitimize this approach. Azzarello’s declaration that [q]ueering is not a rejection, but a layering, a dramatization of exception offers a view of the hopeful openness through which queer ecology functions.' [email protected]

'Queer Environmentality is a sophisticated analysis of selected American texts, within a theoretical context that may begin with Darwin's contribution to evolutionary and environmental theories but goes well beyond him into contemporary theory, including ecofeminism, queer theory and post-humanism.' --American Studies Today Online