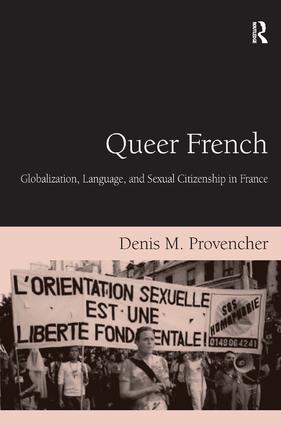 In this book Denis M. Provencher examines the tensions between Anglo-American and French articulations of homosexuality and sexual citizenship in the context of contemporary French popular culture and first-person narratives. In the light of recent political events and the perceived hegemonic role of US forces throughout the world, an examination of the French resistance to globalization and 'Americanization', is timely in this context. He argues that contemporary French gay and lesbian cultures rely on long-standing French narratives that resist US models of gay experience. He maintains that French gay experiences are mitigated through (gay) French language that draws on several canonical voices - including Jean Genet and Jean-Paul Sartre - and various universalistic discourses. Drawing on material from a diverse array of media, Queer French draws out the importance of a French gay linguistic and semiotic tradition that emerges in contemporary textual practices and discourses as they relate to sexual citizenship in 20th- and 21st-century France. It will appeal to an interdisciplinary readership in gender and sexuality studies, cultural studies, linguistics, media and communication studies and French studies.

'Smart, insightful, and far-reaching in its implications for our understanding of sexualities and sexual politics in contemporary France, Queer French is a must for anyone interested in understanding France at the beginning of the twenty-first century.' Lawrence R. Schehr, University of Illinois, Urbana-Champaign, USA 'Could queer lives exemplify the elusive third way� between seemingly incompatible claims to universalism? Provencher’s original study shows how French queers articulate their own mode of sexual citizenship by incorporating markers of globalized identities into the French republican model. Based on popular culture and actual interviews, this book is a unique contribution to the current debates on globalization and sexuality.' David Caron, University of Michigan, Ann Arbor, USA 'In an important way, Queer French invites the reader to think about how lesbians and gays speak with (each) other(s), how they frame their life narratives and how they inhabit and move through city space. Accessible to specialists and non-specialists alike, this book marks a significant contribution to current debates on language and sexuality.' Modern & Contemporary France '…Provencher’s argument that French gays and lesbians are shaping their own queer French� - and that in relation to their Anglo-American counterparts, French gays are not caught in some sort of retarded development on their way to becoming global gay citizens - is not only intriguing, but also entirely compelling, making an important contribution to the study of queer cultures in France certainly, but also to our understanding of the ways in which cultures generally may be resisting or reshaping globalizing Anglo-American ideas…the book reads easily, avoiding the abstruse prose sometimes found in queer theory texts. Provencher’s book should be on the shelves of anyone interested in queer studies, contemporary France, or the cultural effects of globalization.' H-France 'Denis Provench

Denis M. Provencher is Assistant Professor of French and Intercultural Studies at the University of Maryland, Baltimore County, USA. He has published widely in the field and has had work appear in French Cultural Studies, Contemporary French Civilization, Contemporary French & Francophone Studies (SITES), Speaking in Queer Tongues (2004) and The Sitcom Reader (2005).