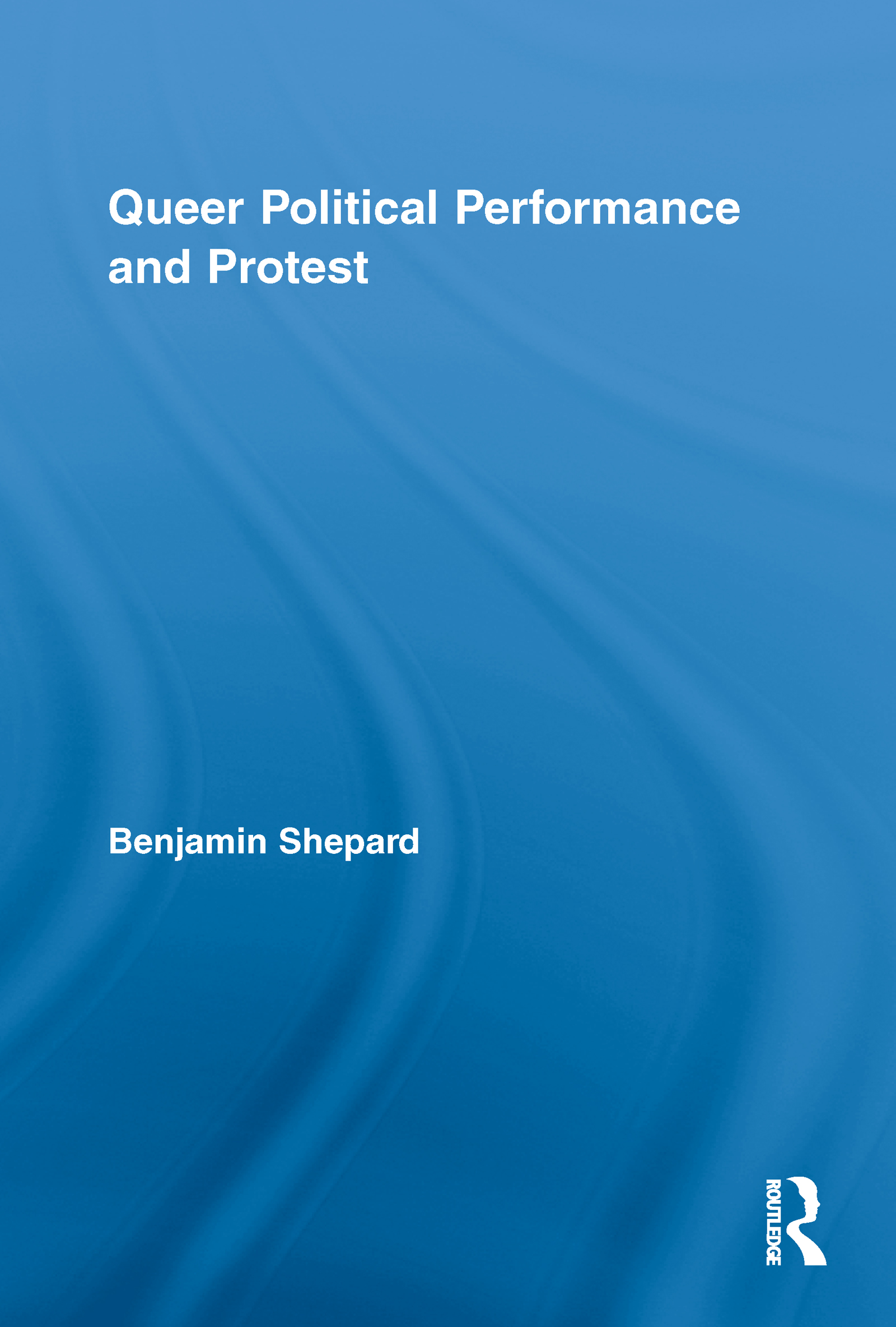 From the birth of the Gay Liberation through the rise of the AIDS Coalition to Unleash Power (ACT UP) in 1987, the global justice movement in 1994, the largest day of antiwar protest in world history in February 2003, the Republican National Convention protests in August 2004, and the massive immigrant rights rallies in the spring of 2006, the streets of cities around the world have been filled with a new theatrical model of protest. Elements of fun, creativity, pleasure, and play are cornerstones of this new approach toward protest and community building. No movement has had a larger influence on the emergence of play in social movement activity than the gay liberation and queer activism of the past thirty years. This book examines the role of play in gay liberation and queer activism, and the ways in which queer notions of play have influenced a broad range of social movements.

"Queer is so much more than an identity, it's an ethos, a practice, an economic system, an-other world-view. Play; that is wildness! With his book Queer Political Performance and Protest Ben Shepard offers the rare book that seamlessly mixes movement history, social history and arts history with a narrative dimension developing a compelling tale of how the creative impulse drives social-change movements. Playfully the book mixes an academic approach with personal reminiscences and interviews to share an aesthetic history that should be read by anyone interested in understanding how the impulse to live outrageously changes worlds." - Robby Herbst, Journal of Aesthetics and Protest

"With a huge heart and enormous amount of research, Benjamin Shepard articulates the transformation of the long tradition of street camp in response to the political and artistic movements provoked by the AIDS crisis. By applying the word 'play' to outsider aesthetics of rebellion he theorizes the ingenuity required for people without rights to force positive change. Using fascinating interviews of foundational community members, he pieces together one coherent understanding of the inventive tactics queer people use to survive, express, make love, have sex, create, and resist - in the face of the twin monsters of oppression and normalcy." -Sarah Schulman, College of Staten Island, author of The Child

"I have been waiting for this book. I knew there was a connection between the queer movement and the alterglobalization movement but could only find the threads. For me it was an intuition. This is the book that tells the history." - Amory Starr, author of Global Revolt: A Guide to the Movements against Globalization

"Taking a unique perspective on social movements, this book creatively explores the interconnections among various forms of play, social activism, and community organizing. It is an innovative study of the meaning of playful spirit and joyful performance in gay liberation and queer movements. This is an important book that is informative, imaginative, and inspired. It's the sociological imagination at play!" - Peter M. Nardi, author of Gay Men's Friendships: Invincible Communities

"Ben Shepard is a marvelous writer, worth reading for that alone. But, above all, this work is a literary playbook for social movements, essential for organizers." - Roxanne Dunbar-Ortiz, author of Roots of Resistance

"This wonderful book tells the remarkable story of the rise of the theatrical and audacious queer movement in the United States. More than that, Shepard probes the experiences of that movement for insights into the significance of theater and what he calls 'play' in social movements generally. A fascinating read that is theoretically illuminating as well." -Frances Fox Piven, Distinguished Professor, CUNY Graduate Center, and author of Challenging Authority: How Ordinary People Change America

"Shepard chronicles decades of queer activism with a focus, refreshingly, on play -- from the Stonewall girls dancing in a kickline while a rebellion that shook the world was sparked on the sidewalk behind them, to Act Up veterans dressing as clowns during a government agency’s hearings in an effort to bring attention to the state’s buffoonish response to the raging AIDS epidemic, to a coalition of activists and sex workers storming New York’s Disney store and singing politically charged renditions of classic Disney tunes to protest the forced desexualization of a newly sanitized Times Square. His invaluable book explores the politics of pleasure and the pleasures of politics, the outrageous joys that underlie so much of the often dead-serious movement for queer liberation. The revolution never sounded like more fun." -Wayne Hoffman, author of Hard: A Novel and co-editor of Policing Public Sex: Queer Politics and the Future of AIDS Activism.

"Benjamin Shepard’s brilliant work on the role of play in the queer political movement is creative and ingenious. He shows how 'play' acts as a safety valve to contain and refresh the movement. This type of play is deadly serious in the face of the denial of human and constitutional rights. Shepard lets the historical facts and ethnographic data tell the story from the early days of AIDS, through ACT-UP, and into the harm reduction theories of HIV-AIDS treatment. A refreshing approach to methodology in these days where the concern seems to be discovering another type of triangulation or wringing our hands about the philosophical underpinnings of qualitative analysis. There is a fascinating story here which illuminates, informs, and actually show us how to structure social movements and improve community organizing." - Michael J. Smith, Professor, Hunter College School of Social Work and Ph.D. Program in Social Welfare, Graduate Center of the City University of New York.

"Benjamin’s Shepard’s Queer Political Performance and Protest: Play, Pleasure and Social Movement is that rare book that brings together the highest level of academic scholarship with a deeply original vision of social justice that are deftly wedding together with startling research and a authorial voice that is both entertaining and completely assured. Combining performance theory with a history of social activism Shepard’s vision here is not only unique but vital to our intellectual and emotional understanding of how politics works." -Michael Bronski, author of Culture Clash: The Making of Gay Sensibility and The Pleasure Principle: Sex, Backlash, and the Struggle for Gay Freedom

"Ben Shepard's new book, Queer Political Performance and Protest: Play, Pleasure, and Social Movement, is a groundbreaking study of the powerful role the ludic played, and continues to play, in queer organizing for social change…this work adds a needed conceptual perspective of play as a unifying but complex through-line in the history of queer social movement organizing. This text is an invaluable read for scholars of social movement history and queer studies. "

"In the end, Shepard composed an appealing monograph…I recommend this book to be adopted by libraries that have holdings for sex research, social work, and community organization."

'Shepard offers a series of case studies, some from which the joy of the protest bursts forth from the page.'

-Shamira Meghani in The Year's Work in Critical and Cultural Theory, 2011

List of Illustrations. Acknowledgments. Introduction: Pleasure is a Resource: From Drag Marches to Global Justice Movements. 1. Play-Acting and World Making: From Berlin to the Black Cat 2. Play as Pleasure: Gay Liberation and Movements for Sexual Freedom 3. Play as Resilience: Eros vs. Thanatos in ACT UP 4.Playing by Different Rules: DIY Experiments in Harm Reduction 5. Play and Panic in the Neoliberal City: The AIDS Prevention Action League and SexPanic! 6. Activism as Circus: From Street Carnival to Direct Action. Conclusion: Reconsidering and Situating Play: From ACT UP to the Rude Mechanical Orchestra. Appendix: Methodological Notes on the Study of Play and Pleasure in Social Movements. Interview Guide. References. Index.

Benjamin Shepard, PhD, is Assistant Professor of Human Services at City Tech/City University of New York. He is the author/editor of five books, including the second part of this study, Play, Creativity, and the New Community Organizing (also under contract with Routledge) and Community Projects as Social Activism: From Direct Action to Direct Services (Sage).