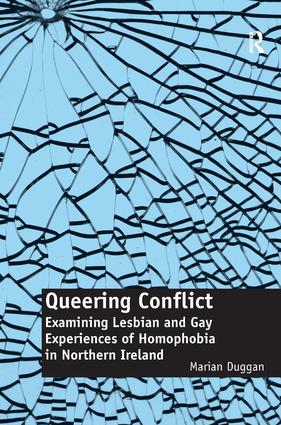 Queering Conflict offers a unique culturally specific analysis into the ways in which homophobia in Northern Ireland has been informed and sustained during the latter half of the twentieth century. This book takes the failure of the British Government to extend the 1967 Sexual Offences Act to Northern Ireland as its central point to demonstrate the subtle, but important, differences governing attitudes towards homosexuality in Northern Ireland. Both homophobia and hate crimes are shown to be situated within the framework of Northern Ireland's socio-political history as well as part of an overall culture of violence which existed as a result of 'the Troubles'. Duggan shows how the influence of moral and religious conservatism born out of sectarian divisions led to homophobia becoming an integral part of community cohesion and identity formation. Decades of political instability led to the marginalization of rights for lesbians and gay men, but the peace process has led to the development of a discourse of equality which is slowly allowing sexual minorities to situate themselves within the new Northern Ireland.

'Queering Conflict provides a fascinating glimpse into the unique cultural circumstances and history of homophobia and hate crime in Northern Ireland. Rich in documentary material, and enriched by the voices of those with first hand experience, this book provides fresh insights into a society characterised both by traditional moral conservatism but also the quest for rights and liberation.' Carl F. Stychin, University of Reading, UK 'This is a fascinating and timely account. Rich in theoretical, historical and methodological insight, Marian Duggan's analysis unpicks the socio-political and cultural context of homophobic prejudice in Northern Ireland, and in doing so makes a significant contribution to our understanding of the victimisation suffered by LGB&T communities and the challenges in developing lasting change.' Neil Chakraborti, University of Leicester, UK 'The presentation of such a wide range of experiences allows for a variety of readers - including sociologists, queer theorists and LGBT historians - to be rewarded by reading this book… the descriptive accounts presented in the book provide valuable first-hand experiences of homophobia that will be welcomed by gay and lesbian historians… the simple matter of bearing witness to the experiences of those who have encountered homophobia provides an extensive, thorough and important contribution to the field. Through Duggan’s masterful situating of homophobia in the unique political, social and religious contexts of communities and nationhood, this book serves as an example of the kinds of accounts of homophobia that must continue to be produced.' British Journal of Criminology