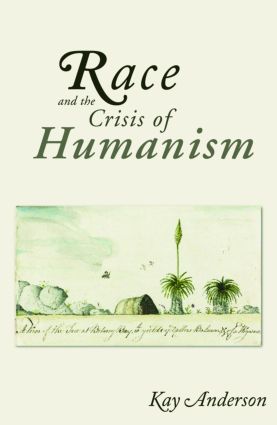 Race and the Crisis of Humanism

The idea that humankind constituted a unity, albeit at different stages of 'development', was in the 19th century challenged with a new way of thinking. The 'savagery' of certain races was no longer regarded as a stage in their progress towards 'civilisation', but as their permanent state. What caused this shift?

In Kay Anderson's provocative new account, she argues that British colonial encounters in Australia from the late 1700s with the apparently unimproved condition of the Australian Aborigine, viewed against an understanding of 'humanity' of the time (that is, as characterised by separation from nature), precipitated a crisis in existing ideas of what it meant to be human.

This lucid, intelligent and persuasive argument will be necessary reading for all scholars and upper-level students interested in the history and theories of 'race', critical human geography, anthropology, and Australian and environmental studies.

Kay Anderson is Professor of Cultural Research at the Centre for Cultural Research, University of Western Sydney. She is a leading scholar in the field of cultural geography and is internationally recognised for her contributions to the development of the 'cultural turn' in Geography. She is the author of Vancouver's Chinatown: Racial Discourse in Canada 1875-1980 and co-editor and contributor of the Handbook of Cultural Geography.

She has recently been presented with the 2007 Honours Award for contributions to scholarship on race and ethnicity by the Ethnic Geography Speciality Group of the Associatin of American Geographers.