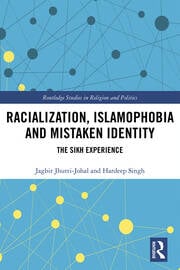 Exploring the issue of Islamophobic attacks against Sikhs since 9/11, this book explains the historical, religious and legal foundations and frameworks for understanding race hate crime against the Sikh community in the UK.

Focusing on the backlash that Sikhs in the UK have faced since 9/11, the authors provide a theological and historical backdrop to Sikh identity in the global context, critically analysing the occurrences of Islamophobia since 9/11, 7/7 and most recently post-Brexit, and how British Sikhs and the British government have responded and reacted to these incidents. The experiences of American Sikhs are also explored and the impact of anti-Sikh sentiment upon both these communities is considered. Drawing on media reporting, government policies, the emerging body of inter-disciplinary scholarship, and empirical research, this book contributes to the currently limited body of literature on anti-Sikh hate crime and produces ideas for policy makers on how to rectify the situation.

Providing a better understanding of perceptions of anti-Sikh sentiment and its impact, this book will of interest to scholars and upper-level students working on identity and hate crime, and more generally in the fields of Religion and Politics, Cultural Studies, Media Studies, and International Studies.

Foreword: Lord Singh of Wimbledon, Director of the Network of Sikh Organisations (NSO)

Chapter 1: The Evolution of the Sikh Dharam and Identity

Jagbir Jhutti-Johal is a Senior Lecturer in Sikh Studies in the Department of Theology & Religion at the University of Birmingham.

is a freelance journalist, Deputy-Director for the Network of Sikh Organisations and Assistant Editor of the Sikh Messenger.

"Racism in Britain has become nastier since the EU Referendum and the election of President Trump. This book shows the impact on the Sikh community and reminds us that well intentioned policies have ignored this significant faith community." - Right Hon Fiona Mactaggart formerly Home Office minister and MP for Slough

"Since 9/11 the government and the general public have not realised how often it has been Sikhs who have borne the brunt of many Islamophobic attacks. Thank you, Jagbir Jhutti-Johal and Hardeep Singh for outlining and contextualising so many incidents. The time may now be closer when Sikhs receive the sort of support already currently available to Jews and Muslims." - Eleanor Nesbitt, Professor Emeritus, Warwick Religions and Education Research Unit, University of Warwick, UK

"While Sikhs have a long history in the region, this is the first book to examine critically how Sikh bodies have been racialized from a British perspective. This is a massive contribution to our understanding of the British Sikh experience, particularly as it relates to the modern period, and it has important resonance for scholars in various fields, from religious, ethnic, and diaspora studies to political science and anthropology." - Simran Jeet Singh, New York University, US

"I fear perpetrators of hate crime are unlikely to read this book, but those who might do something about its existence – teachers, policy makers, police and members of the media – should read it. This highly accessible, meticulously documented volume fills a gaping hole in the all-too-common ignorance and religious illiteracy to be found in contemporary society." - Eileen Barker, Professor Emeritus of Sociology at the London School of Economics and founder of INFORM.

"At a time of significant national concern about antisemitism and anti-Muslim prejudice, this book shines a valuable light on the hidden victimisation suffered by members of a faith group whose largely seamless integration into liberal Western society has left them feeling invisible. Providing details of the many hate crimes suffered by Sikhs whose religious symbols have led to them being mistaken for Muslims, the authors make a persuasive case that greater religious literacy is imperative at all levels of British society, not least among politicians, police and the media." - Andrew Norfolk, The Times, UK