Radical Shakespeare
Politics and Stagecraft in the Early Career 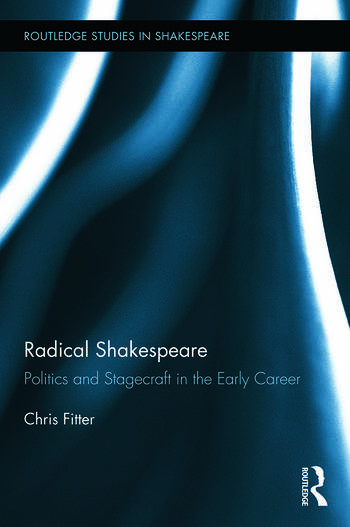 Radical Shakespeare: Politics and Stagecraft in the Early Career

This book argues that Shakespeare was permanently preoccupied with the brutality, corruption, and ultimate groundlessness of the political order of his state, and that the impact of original Tudor censorship, supplemented by the relatively depoliticizing aesthetic traditions of later centuries, have together obscured the consistent subversiveness of his work. Traditionally, Shakespeare’s political attitudes have been construed either as primarily conservative, or as essays in richly imaginative ambiguation, irreducible to settled viewpoints. Fitter contends that government censorship forced superficial acquiescence upon Shakespeare in establishment ideologies — monarchic, aristocratic and patriarchal — that were enunciated through rhetorical set pieces, but that Shakespeare the dramatist learned from Shakespeare the actor a variety of creative methods for sabotaging those perspectives in performance in the public theatres. Using historical contextualizations and recuperation of original performance values, the book argues that Shakespeare emerged as a radical writer not in middle age with King Lear and Coriolanus — plays whose radicalism is becoming widely recognized — but from his outset, with Henry VI and Taming of the Shrew. Recognizing Shakespeare’s allusiveness to 1590s controversies and dissident thought, and recovering the subtextual politics of Shakespeare’s distinctive stagecraft reveals populist, at times even radical meaning and a substantially new, and astonishingly interventionist, Shakespeare.

Acknowledgements  1. Historical Foundations: the Black Nineties and the Tudor Richesse of Political Dissidence  2. Theatrical Foundations: Performance Criticism and Transgressive Overdetermination  3. 2 Henry VI: Jack Cade, the Hacket Rising, and Shakespeare’s Vision of Popular Rebellion  4. 2 Henry VI: Contexts and Allusion  5. 2 Henry VI: Political Stagecraft  6. Carnival Dynamics and The Taming of the Shrew  7. "The quarrel is between our masters and us their men": Romeo & Juliet, Dearth, and the London Riots  8. As You Like It and Political Topicality  9. "Betrayed to Every Modern Censure": As You Like It and Vestry Values  10. As You Like It Part Three: Dysresolution, Sexual Politics, and the Public Sphere  11. Conclusions  Bibliography  Index

"To my mind this book deserves to cause an earthquake in Shakespeare studies." --John Carey, Emeritus Merton Professor of English, University of Oxford

"This challenging book combines a wealth of new contextual material with a sharp eye for the details of contemporary staging. Fitter makes us revisit many familiar passages as if for the first time -- a very rare thing in Shakespeare criticism." --David Norbrook, Professor of English, University of Oxford

"A stunning academic achievement . . . indispensable readings..Patiently tracing how the conditions of the decade Fitter calls the Black Nineties show up in the language and plots of Shakespeare’s plays", [the argument is] "for a skeptic . . . properly nuanced, ultimately convincing." --Charles Ross, Professor and Director of Comparative Literature, Purdue University, Renaissance Quarterly

"This study of Shakespeare's early work -- 2 Henry VI, The Taming of the Shrew, Romeo and Juliet, and analysed at greatest length, As You Like It --- argues that the plays leave a number of clues that reveal his political leanings. . . Fitter is often a keen, sometimes astute reader . . . he makes a number of substantial points about the topical nature of the plays." --Andrew Hadfield, University of Sussex,Times Literary Supplement

"Massively and scrupulously researched" the findings "are frequently a revelation, enabling us to notice things in Shakespeare that previously we had skipped over...[An] always closely and passionately argued book that makes a persuasive case for a populist, oppositional Shakespeare that conservatives (as well as antisocialist 'theoretical' and 'historicizing') approaches have prevented us from seeing. I look forward eagerly to Fitter's promised volume on Shakespeare's later career." --Peter Holbrook, University of Queensland, Australia, Modern Philology