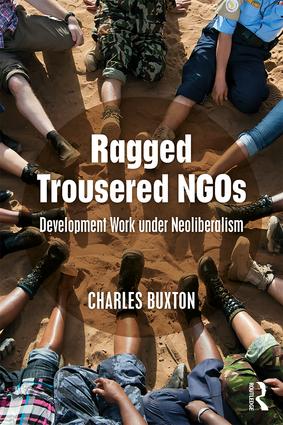 Ragged Trousered NGOs is a compelling first-hand account of the NGO sector and wider civil society over the past 40 years, examining how and why people take collective action and engage in social development projects. The book explores different organisational and methodological aspects of NGO work and social action, asking what was possible to achieve at a grass-roots level at different times, in different economic and political contexts in the East and West. Adopting a critical perspective, the author argues that social action continues to play a vital and varied role, and yet it struggles to challenge deep-rooted power relations and traditional forms of behaviour in today's unequal world.

In particular, the book draws on examples from the former Soviet Union in transition, and the UK's voluntary sector over the last 40 years, with a view to challenging Eurocentric views about organisations and communities. The analysis adopts a Gramscian view of hegemony and an internationalist and anti-war position on key issues arising in recent armed conflicts and the new cold war with Russia. The book concludes by addressing the challenges for development workers, noting the precarious nature of NGO work despite its many achievements, and suggesting ways in which social activists can pick up more strength and support.

This book's practical perspective on progressive forms of organisational management will be of considerable interest to civil society and NGO development workers, as well as to researchers and students in the fields of international development, politics, sociology and regional studies.

"At a time during which the complex world of NGOs is often framed rather simplistically in terms of over-paid professionals or naïve do-gooders, Charles Buxton offers a different view of the NGO worker as political activist engaged at home and away. Wide ranging, well informed and deeply personal, Ragged Trousered NGOs deserves to be read by anyone interested in civil society and social change." — David Lewis, London School of Economics and Political Science, UK

"This is a great book which invites us to reflect on civil society work in different contexts and different points of time. The book excellently compares civil society in post-Soviet Russia and Kyrgyzstan as well as in the UK in the 1970s. The thought-provoking questions which the book focuses on can only be asked by someone who has a wealth of international NGO experience as well as the high ability for shrewd reflexivity. The author is well-positioned to do this. The story-telling style of the book is very appealing and vividly demonstrates the rich experience of the author and his critical reflection on his work. It is an inspirational book for NGO practitioners to reflect on their work and take actions that will really benefit those who need it most. For the academic audience including students, the book will offer a fresh perspective on civil society and development from the standpoint of civil society worker."

"This new book traces Charles (Charlie) Buxton’s personal journey from East London, where he combined political activism with community organisation, to the Soviet Union, Former Soviet Union, and Central Asia. This is not simply a narrative of Charlie’s rich and varied experiences from 1996 to 2001 as regional programme manager for Voluntary Service Overseas for the former Soviet Union and Eastern Europe, and from 2001 as programme manager for Central Asia for the International NGO Training and Research Centre (INTRAC for civil society), but presents a deep and critical reflection on the theory and practice of international development and civil society capacity building. He challenges the very aid system on which the work of INTRAC largely relies. Charlie has not lost his radical politics, which illuminated and enriched his previous books on the region. This book is clearly written, accessible to all interested activists and scholars, and is very well organised. A serious and important contribution."

"This is a fascinating account of NGO struggles in both Europe (East London) as well as Russia and Central Asia (in particular Kyrgyzstan). It is based on personal experiences encompassing four decades of civic activism by the author and offers great insights in the complex political dilemmas of NGOs. The book generates unique excellent case material that can be of use for students interested in the history and current challenges for NGOs as well as for NGO practitioners."

Introduction: A story of civil, social and political activism that starts in East London and travels to the USSR and post-soviet Russia and Central Asia

1. On time, place and youth activism, from Kyrgyzstan’s 2010 revolution to the anti-racist movement in East London in the 1970s

2. Schools of self-management: promoting an alternative urban strategy in the face of Thatcherism in the 1980s

3. International volunteering and solidarity and the fall of soviet socialism

5. Improving services or promoting rights – ideological and practical dilemmas for NGOs faced with cuts to social welfare East and West

6. Working in conflict: a Gramscian and world systems analysis of NGO responses in the new hot and cold wars

7. Theories of change: new agendas of civil society, social and political activists at the international, national and local levels

Charles Buxton was Senior Capacity Building Specialist and Regional Representative for INTRAC’s Central Asia Programme, based in Bishkek, Kyrgyzstan, from 2002-2018. He still lives in Bishkek, active as an independent civil society analyst and expert.