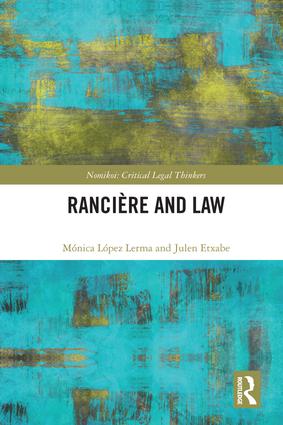 This book is the first to approach Jacques Rancière’s work from a legal perspective. A former student of Louis Althusser, Rancière is one of the most important contemporary French philosophers of recent decades: offering an original and path-breaking way to think politics, democracy and aesthetics. Rancière’s work has received wide and increasing critical attention, but no study exists so far that reflects on the wider implications of Rancière for law and for socio-legal studies. Although Rancière does not pay much specific attention to law—and there is a strong temptation to identify law with what he terms the "police order"—much of Rancière’s historical work highlights the creative potential of law and legal language, with important legal implications and ramifications. So, rather than excavate the Rancièrean corpus for isolated statements about the law, this volume reverses such a method and asks: what would a Rancière-inspired legal theory look like? Bringing together specialists and scholars in different areas of law, critical theory and philosophy, this rethinking of law and socio-legal studies through Rancière provides an original and important engagement with a range of contemporary legal topics, including constituent power and democracy, legal subjectivity, human rights, practices of adjudication, refugees, the nomos of modernity, and the sensory configurations of law. It will, then, be of considerable interest to those working in these areas.

Introduction: Rancière and the Possibility of Law Mónica López Lerma and Julen Etxabe Part I- Law Without Method 1. Rancière and the Dramaturgy of Law Julen Etxabe Part II- From The Rights Of Subjects To The Subjects Of Rights 2. Fight for your Rights: Refugees, Resistance, and Disagreement Ari Hirvonen3. Rancière and the Legal Subject: Coming to Terms with non-Existence Susanna Lindroos-Hovinheimo4. Rancière, Human Rights, and the Limits of Politics of Process Tom Frost Part III- Democracy, State, And Globalization 5. The Constitution of the Constitution: Democratic Legitimacy and Public Discourse Eric Heinze6. Rancière and Schmitt: Sons of Ares? Panu Minkkinen Part IV- Law And Aesthetics 7. Un-Doing Law: Public Art as Contest Over Meanings Petr Agha8. Representing Law "in" the Holocaust or Seeking the Unrepresented: Undoing the Legacy of Nuremberg Wayne Morrison9. Justice Between Terror and Law Mónica López Lerma

Mónica López Lerma is based at Reed College (USA) and Julen Etxabe is based at the University of Helsinki, Finland