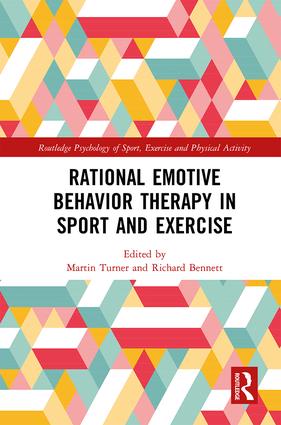 It brings together leading international experts and practitioners to reflect on the use of REBT in sport and exercise, and examine the techniques used. Each chapter contains a case study, contextualising theory into practice, giving a rare and detailed insight into the use of REBT across a diverse range of issues. Some of the topics covered include:

• the theory and practice of REBT

• the use of REBT interventions in Paralympic soccer

• the use of REBT in managing injury and loss

Offering an invaluable insight into the practical application of REBT, this book is essential reading for undergraduates, postgraduates, trainee and qualified sport and exercise psychologists, and counsellors wishing to move into sport and exercise.

"Mental health issues in athletes is a growing area of concern. Rational Emotive Behavior Therapy in Sport and Exercise is a good book, that is well explained, evidence-based, and practical. Case-studies give a feel to how this therapy works in practice." Professor Andy Lane, HCPC Registered Psychologist, Director of Research Excellence and Associate Dean at the University of Wolverhampton, UK.

"As a sport psychologist I use several frameworks to help sports participants manage themselves better in and out of the competitive arena. This book has become one of my go-to resources when I want to explore an REBT approach with a client. Each chapter offers evidence based solutions brought to life through case studies and an engaging text." Dan Abrahams, HCPC Registered sport psychologist, best-selling author, and host of The Sport Psych Show podcast.

1The Use of Rational Emotive Behavior Therapy (REBT) in Sport and Exercise: An Introduction

2 The Theory and Practice of Rational Emotive Behavior Therapy (REBT)

5 "It Will be the End of the World If We Don’t Win This Game": Exploring the Use of Rational Emotive Behavior Therapy (REBT) Interventions in Paralympic Soccer

6 Managing Injury and Loss: The Use of Rational Emotive Behavior Therapy (REBT) with a Collegiate Football Player

14 "Is it Really That Bad?": A Case-Study Applying Rational Emotive Behavior Therapy (REBT) with an Elite Youth Tennis Player

15 "It’s the End of the World as We Know It (and I Feel Fine)": The Use of Rational Emotive Behavior Therapy (REBT) to Increase Function and Reduce Irrational Beliefs of an Injured Athlete

is a Chartered Psychologist and Associate Fellow of the British Psychological Society, is registered as a Clinical Psychologist with the Health and Care Professions Council, and is an accredited Cognitive Behavioural Psychotherapist with the British Association of Behavioural and Cognitive Psychotherapies. He has extensive knowledge and skill in the theory and practice of REBT after more than 20 years’ experience working clinically within the NHS and private practice. In addition to his clinical experience, Richard has widespread experience of teaching and training in REBT. He is a Senior Academic Tutor in Cognitive Behavior Therapy (CBT) within the psychology department at the University of Birmingham, UK, where he is the lead for the Postgraduate Diploma in High Intensity Psychological Therapies, and Deputy Course Director of the Centre for REBT.

This series offers a forum for original and cutting edge research exploring the latest ideas and issues in the psychology of sport, exercise and physical activity. Books within the series showcase the work of well-established and emerging scholars from around the world, offering an international perspective on topical and emerging areas of interest in the field. This series aims to drive forward academic debate and bridge the gap between theory and practice, encouraging critical thinking and reflection among students, academics and practitioners.