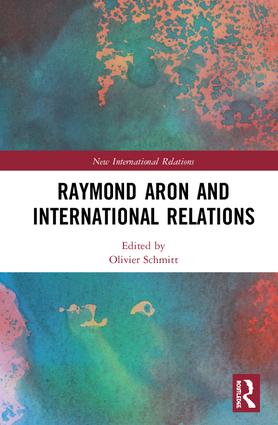 At a time when the field of International Relations (IR) is diverting from grand theoretical debates, rediscovering the value of classical realism and exploring its own intellectual history, this book contributes to these debates by presenting a cohesive view of Raymond Aron’s theory of IR. It explores how a careful reading of Aron can contribute to important current debates, in particular what a theory of IR can be (and thus, what is within or outside the scope of this theory), how to bridge the gap that emerged in the 1970s between a "normative" and a "scientific" theory of IR, and finally how multidisciplinarity is possible (and desirable) in the study of IR.

This edited collection offers a synthetic approach to Raymond Aron’s theory of International Relations by bringing together some of the most prominent specialists on Raymond Aron, thus filling an important gap in the current market of books devoted to IR theories and the historiography of the field. The volume is divided into three parts: the first part explores Aron’s intellectual contribution to the theoretical debates in IR, thus showing his originality and prescience; the second part traces Aron’s influence and explores his relations with other prominent scholars of his time, thus contributing to the historiography of the field; and the third part analyses Aron’s contemporary relevance. This comprehensive volume contributes to current debates in the field by showing the originality and breadth of Aron’s thought.

This book will be of great interest to academics and students interested in IR theories, strategic studies and the historiography of the field.

A Theory of International Relations or a theory of foreign policy? Reading Peace and War Amongst Nations (Olivier Schmitt)

Raymond Aron and the Idea of Europe (Joël Mouric)

The Diplomat, the Soldier, and the Spy: towards a new taxonomy in International Relations (Olivier Chopin)

Olivier Schmitt is Associate Professor of Political Science at the Center for War Studies, University of Southern Denmark, and the scientific director of the French Association for War and Strategic Studies (AEGES). His work focuses on International Relations theories, strategic studies and contemporary warfare.

The field of international relations has changed dramatically in recent years, with new subject matter being brought to light and new approaches from in and out of the social sciences being tried out. This series offers itself as a broad church for innovative work that aims to renew the discipline.