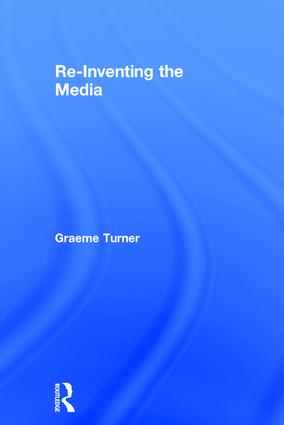 While media and cultural studies has made much of the changes to the media landscape that have come from digital technologies, these constitute only part of the transformations that have taken place in what amounts of a reinvention of the media over the last two decades.

Graeme Turner takes on the task of re-thinking how media studies approaches the whole of the contemporary media-scape by focusing on three large, cross-platform, and transnational themes: the decline of the mass media paradigm, the ongoing restructuring of the relations between the media and the state, and the structural and social consequences of celebrity culture.

By addressing the fact that the reinvention of the media is not simply a matter of globalising markets or the take-up of technological change, Turner is able to explore the more fundamental movements and widespread trends that have significantly influenced the character of what the contemporary media have become, how it is structured, and how it is used.

is a must-read for both students and scholars of media, culture and communication studies.

"What is the media?" and "What is media studies?": two huge, challenging questions that require the likes of Graeme Turner to answer properly. And he delivers the goods with thoughtful and insightfully sweeping commentary on precisely what’s new and different, what’s not. This is a book we should all be reading.

At last, an introduction to media studies that doesn't treat the digital era as an after-thought or something entirely separate from what came before. Turner begins the necessary task of re-centering media studies as it is and will be, rather than as it was.

Graeme Turner is among the leading theorists and analysts of media culture today, yesterday—and probably tomorrow, as well. Re-Inventing the Media offers a judicious yet lively, scholarly yet readable, timely, and sage view of what is happening in our complex world of old, middle-aged, and new media. Bravo!

Part I: Rethinking the Media

2. Entertainment, information, and the ‘culture of search’

Part II: The Media and the Nation-State

3. The Media, the Nation, and Globalization

Part III: The Consequences of Celebrity

5. The Celebrification of the Media

6. Intervening in the Social: the function of celebrity culture

Graeme Turner is Professor of Cultural Studies in the Centre for Critical and Cultural Studies at the University of Queensland. Among the leading figures within media and cultural studies, his most recent books include Locating Television: Zones of Consumption (2013) (with Anna Cristina Pertierra), and Television Histories in Asia (2015) (co-edited with Jinna Tay).