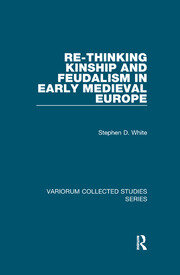 This is the second collection of studies by Stephen D. White to be published by Variorum (the first being Feuding and Peace-Making in Eleventh-Century France). The essays in this volume look principally at France and England from Merovingian and Anglo-Saxon times up to the 12th century. They analyze Latin and Old French discourses that medieval nobles used to construct their relationships with kin, lords, men, and friends, and investigate the political dimensions of such relationships with particular reference to patronage/clientage, the use of land as an item of exchange, and feuding. In so doing, the essays call into question the conventional practice of studying kinship and feudalism as independent systems of legal institutions and propose new strategies for studying them.

Contents: Introduction; Maitland on family and kinship; The invention of English individualism: Alan Macfarlane and the modernization of pre-modern England (with Richard T. Vann); Clotild's revenge: politics, kinship, and ideology in the Merovingian blood feud; Kinship and lordship in early medieval England: the story of Sigeberht, Cynewulf, and Cyneheard; The discourse of inheritance in 12th-century France: alternative models of the fief in 'Raoul de Cambrai'; English feudalism and its origins; Stratégie rhétorique dans la Conventio de Hugues de Lusignan; The politics of fidelity in early 11th-century France: Fulbert of Chartres, William of Aquitaine, and Hugh of Lusignan; Book review: Susan Reynolds, Fiefs and vassals: the medieval evidence reinterpreted; The politics of exchange: gifts, fiefs, and feudalism; Giving fiefs and honor: largesse, avarice, and the problem of 'feudalism' in Alexander's testament; Service for fiefs or fiefs for service: the politics of reciprocity; A crisis of fidelity in c.1000?; Index.

Stephen D. White is the Asa G. Candler Professor of Medieval History and Director of the Medieval Studies Program at Emory University, USA.