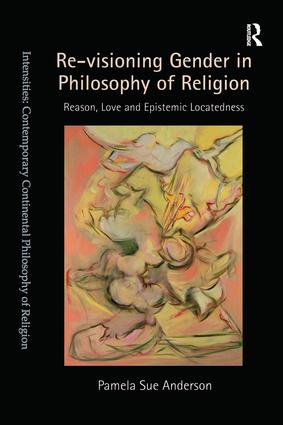 Re-visioning Gender in Philosophy of Religion

A passion for justice and truth motivates the bold challenge of Revisioning Gender in Philosophy of Religion. Unearthing the ways in which the myths of Christian patriarchy have historically inhibited and prohibited women from thinking and writing their own ideas, this book lays fresh ground for re-visioning the epistemic practices of philosophers. Pamela Sue Anderson seeks both to draw out the salient threads in the gendering of philosophy of religion as it has been practiced and to re-vision gender for philosophy today. The arguments put forth by contemporary philosophers of religion concerning human and divine attributes are epistemically located; yet the motivation to recognize this locatedness has to come from a concern for justice. This book presents invaluable new perspectives on the philosopher’s ever-increasing awareness of his or her own locatedness, on the gender (often unwittingly) given to God, the ineffability in both analytic and Continental philosophy, the still critical role of reason in the field, the aims of a feminist philosophy of religion, the roles of beauty and justice, the vision of love and reason, and a gendering which opens philosophy of religion up to diversity.

'Until quite recently the significance of gender and epistemic locatedness in philosophy of religion was virtually unacknowledged. But thanks to the gallant efforts of Pamela Sue Anderson and others, there is a new horizon emerging. A re-visioning of the field has begun, and signs of the crumbling of patriarchy and objectification are at hand. In this insightful and provocative book, Anderson offers a fresh, au fait, and much-needed feminist voice in contemporary philosophy that will most certainly play a central and subversive role in this ensuing transformation.' Chad Meister, Bethel College, USA 'Analytic and continental, feminist and non-feminist philosophers of religion should all find much to engage with here, in part because Anderson has created a conversation across borders that are not often traversed.' APA Newsletter on Feminism and Philosophy ’This important study full of insight, wisdom and critical comment is fired by a passion for truth and justice and a deep concern for advancing the case for reason, love and beauty in the contemporary global world…. I chose this new publication for an attentive, close reading since, knowing Anderson’s earlier work, I was full of expectations, eagerly anticipating new perspectives opening up before my mind. I have not been disappointed as I have learnt a great deal and been encouraged to reflect critically and constructively on some of her ideas in my own work.’ Religion and Gender 'Anderson fulfils her own call for philosophers to confront and transform oppressive ways, and paves a way for others to 'be more bold' in re-visioning not only gender but other dimensions of existence in philosophy of religion.' Modern Believing