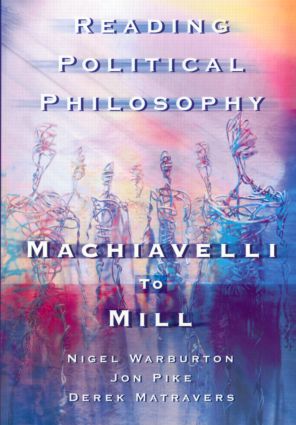 This clear and thorough introduction provides students with the skills necessary to understand the main thinkers, texts and arguments of political philosophy and thought. Each chapter comprises a brief overview of a major political thinker, followed by an introduction to one or more of their most influential works and an introduction to key secondary readings.

The book introduces and assesses: Machiavelli's Prince; Hobbes' Leviathan; Locke's Second Treatise on Government; Rousseau's Social Contract; Marx and Engels' German Ideology (Part 1); Mill's On Liberty and The Subjection of Women. Reading Political Philosophy requires no previous knowledge of philosophy or politics and is ideal for newcomers to political philosophy and political thought.

This book is well geared to the needs of courses introducing political philosophy by way of canonical texts.The quality of secondary literature represented is first rate and the quantity is nicely judged for a stimulating but realistic student workload. - THES

Nigel Warburton is lecturer in philosophy at the Open University. He is author of the bestsellers Philosophy: The Basics; Thinking from A-Z; Philosophy: the Classics; Philosophy: Basic Readings, and Freedom: An Introduction with readings, all published by Routledge.

Derek Matravers is senior lecturer in philosophy at the Open University. He is the author of Art and Emotion (1998).

Jon Pike is staff tutor in Philosophy at the Open University. He is the author of From Aristotle to Marx (1999).