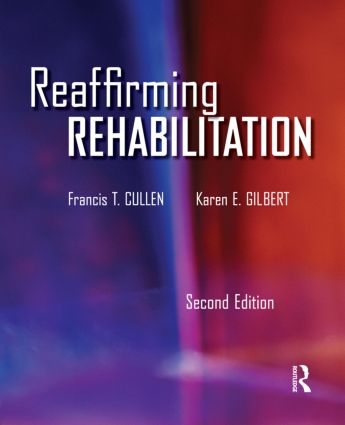 Reaffirming Rehabilitation , 2nd Edition, brings fresh insights to one of the core works of criminal justice literature. This groundbreaking work analyzes the rehabilitative ideal within the American correctional system and discusses its relationship to and conflict with political ideologies. Many researchers and policymakers rejected the value of rehabilitation after Robert Martinson’s proclamation that "nothing works." Cullen and Gilbert’s book helped stem the tide of negativism that engulfed the U.S. correctional system in the years that followed the popularization of the "nothing works" doctrine. Now Cullen traces the social impact on U.S. corrections policy. This new edition is appropriate as a textbook in corrections courses and as recommended reading in related courses. It also serves as a resource for researchers and policymakers working in the field of corrections.

"Reaffirming Rehabilitation is a classic. It is a must read for any scholar interested in understanding U.S. corrections and correctional policy. When first written in 1982, the book provided a clear warning of the dangers of abandoning rehabilitation, forecasting the problems that would arise for a system that embraced punishment. Their forecast proved correct. They were right — the intractable rise in incarceration damaged those who were imprisoned and the communities from which they came. The cautions they provided in the book about what would happen if correctional rehabilitation was discarded are as informative today as they were when first written. This new edition documents what happened to corrections in the years since 1982 and the problems arising from a correctional system focused on punishment, deterrence and incapacitation. They end with a discussion about the direction corrections must take in the future and the challenge of establishing an evidence-based rehabilitation focus if the system is going to move beyond the punitive, failed policies of the past. The roadmap for reaching this objective is given in the five recommendations provided to guide the future of rehabilitation. We can only hope that policy makers will take the time to read these recommendations and act upon them." ~ Doris Layton MacKenzie, Director, Penn State Justice Center for Research and Professor, Crime, Law and Justice, Department of Sociology, the Pennsylvania State University " Reaffirming Rehabilitation was a brilliant exposition of the socio-political forces that affected the viability of the rehabilitative ideal. As such, it served as a powerful motivating force for those of us involved in generating the evidence needed to support the empirical utility of rehabilitation policies and strategies." ~ Paul Gendreau, Professor Emeritus in Psychology, University of New Brunswick Saint John "More than thirty years ago, Francis Cullen and Karen Gilbert, in this path-breaking book, warned that the abandonment of the ideal of rehabilitation would open a Pandora’s Box of negative consequences—for our criminal justice system, and for the character of the nation as a whole. They were right. This timely revision reminds us that, as much as any book published since America’s prison boom began, Reaffirming Rehabilitation stands as a clarion call to, in Cullen and Gilbert’s words, 'fashion a corrections that is a source of national pride, not shame.'" ~ Elliott Currie, Professor, Criminology, Law and Society, University of California, Irvine The first edition of Reaffirming Rehabilitation was named one of "The Great Books in Criminal Justice: As Ranked by Elite Members of the Academy of Criminal Justice Sciences," by Gennaro F. Vito & Richard Tewksbury, Journal of Criminal Justice Education , 2008, 19:3, 366-382.

Francis T. Cullen is Distinguished Research Professor of Criminal Justice and Sociology at the University of Cincinnati. Professor Cullen has published more than 300 works in the areas of criminological theory, corrections, white-collar crime, public opinion, and the measurement of sexual victimization.

Karen Gilbert was a researcher pursuing an advanced degree in criminal justice when the first edition was being written.