Reason, Religion and the Australian Polity
A Secular State? 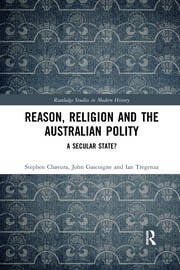 Reason, Religion and the Australian Polity: A Secular State?

How did the concept of the secular state emerge and evolve in Australia and how has it impacted on its institutions? This is the most comprehensive study to date on the relationship between religion and the state in Australian history, focusing on the meaning of political secularity in a society that was from the beginning marked by a high degree of religious plurality.

This book tracks the rise and fall of the established Church of England, the transition to plural establishments, the struggle for a public Christian-secular education system, and the eventual separation of church and state throughout the colonies. The study is unique in that it does not restrict its concern with religion to the churches but also examines how religious concepts and ideals infused apparently secular political and social thought and movements making the case that much Australian thought and institution building has had a sacral-secular quality. Social welfare reform, nationalism, and emerging conceptions of citizenship and civilization were heavily influenced by religious ideals, rendering problematic traditional linear narratives of secularisation as the decline of religion. Finally the book considers present day pluralist Australia and new understandings of state secularity in light of massive social changes over recent generations.

The Secular over Time

The Structure of the Argument

PART I FROM ANGLICAN ESTABLISHMENT TO LIBERAL SEPARATIONISM

From Toleration to Pluralism

Bishop Broughton in Defence of the Ancien Régime

The Seeds of Pluralism

3 The Coming of Plural Establishment

Richard Bourke and the Church Acts

The Schools Question—Education and the State

4 The Separation of Church and State

The Victory for Voluntaryism in South Australia

Hyper-Protestant and Broad Church Approaches to the Church-State Question in NSW: Lang and Woolley

Abolition of State Aid in NSW and Tasmania

A Secular State in Victoria?

Disbelief in the Colonies

Religion and the Secular Education Acts

A Secular Constitution? The Federation Debates

State Debates on a Recognition Clause

PART III MIGRATIONS OF THE HOLY: ON THE SACRED ELEMENTS OF NATIONAL LIFE

The Moral Economy of the Early Australian Commonwealth

The Critique of Contract and the Living Wage—Neo-medievalism or Advanced Liberalism?

The Moral Commonwealth—Secular or Sacred?

Civil Religion: From Civic Protestantism to the Anzac Tradition

Civic Protestantism and the Theology of Empire

Nation, Empire and the Sacred: From Empire Day to Anzac Day

9 Citizenship, the Nation, and Religion

Idealism, the Broad Church, and the Moral Foundations of Citizenship

Citizenship, Gender and the Public Sphere: The Role of Protestant Women

Sacral-Secular Citizenship and the Social Order between the Wars

PART IV THE SHIFTING TERRAIN OF RELIGION AND THE SECULAR: FROM THE MID-TWENTIETH CENTURY TO THE PRESENT

Secularism, Conflict and the ‘Servile State’: John Anderson and his Influence

Catholics, Secularism and the ‘Free Society’

The Return of State Aid

Stephen A. Chavura is an independent scholar who lectures in history at Campion College, Sydney

John Gascoigne is an Emeritus Professor in the School of Humanities, University of New South Wales