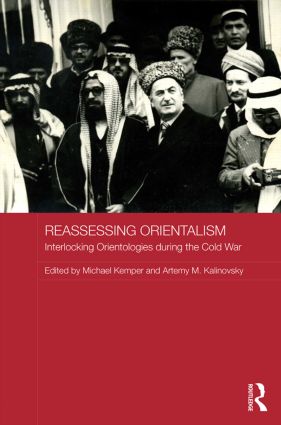 Orientalism as a concept was first applied to Western colonial views of the East. Subsequently, different types of orientalism were discovered but the premise was that these took their lead from Western-style orientalism, applying it in different circumstances. This book, on the other hand, argues that the diffusion of interpretations and techniques in orientalism was not uni-directional, and that the different orientologies – Western, Soviet and oriental orientologies – were interlocked, in such a way that a change in any one of them affected the others; that the different orientologies did not develop in isolation from each other; and that, importantly, those being orientalised were active, not passive, players in shaping how the views of themselves were developed.

"On their merits individually, and taken as a whole, the contributions in this volume will be of great interest to scholars of Soviet history, the Cold War, contemporary Islam, and academic politics. Kemper and Kalinovsky have set the agenda for scholarly discussions of Orientalism for the near future."

"On the whole, the book makes a compelling argument for the need to take into account the global dynamics of the Cold War in order to understand the development of Soviet Oriental studies and, in particular, the paradox why a discipline that after 1917 was 'officially called upon to transform from a tool of oppression into an instrument of liberation' turned into a more effective instrument of politics and state power than had been the case before the revolution." Matthias Battis, St. Petersburg

1. Introduction: Interlocking Orientologies in the Cold War Era Artemy M. Kalinovsky and Michael Kemper Part 1: Origins and Comparisons 2. Orients Compared: US and Soviet Imaginaries of the Modern Middle East Masha Kirasirova Part 2: Transfers 3. From Tents to Citadels: The Transfer of Oriental Archaeology to Soviet Kazakhstan Alfrid K. Bustanov 4. ‘Ulama’-Orientalists: Madrasa Graduates at the Soviet Institute of Oriental Studies Bakhtiyar M. Babajanov 5. "Because of our Commercial Intercourse and Bringing about a Better Understanding Between the Two Peoples": A History of Japanese Studies in the United States Ruud Janssens Part 3: Competition and Conflict 6. Competing National Orientalisms: The Cases of Belgrade and Sarajevo Armina Omerika 7. Propaganda for the East, Scholarship for the West: Soviet Strategies at the 1960 International Congress of Orientalists in Moscow Michael Kemper 8. Encouraging Resistance: Paul Henze, the Bennigsen School, and the Crisis of Détente Artemy M. Kalinovsky

Michael Kemper is Professor of Eastern European Studies at the University of Amsterdam, Netherlands

Artemy M. Kalinovsky is Assistant Professor in the European Studies Department at the University of Amsterdam, Netherlands