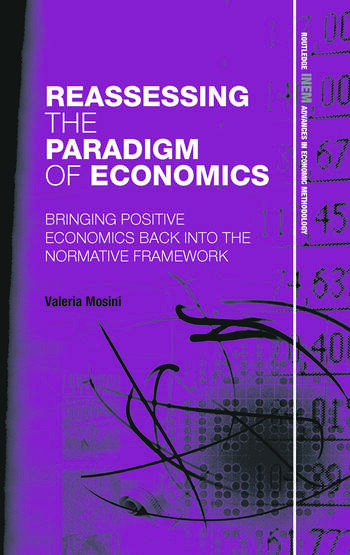 Reassessing the Paradigm of Economics: Bringing Positive Economics Back into the Normative Framework

When President Reagan and Prime Minister Thatcher adopted the neoliberal doctrine as the paradigm of economics, there was no evidence that the move would have been successful, but thirty years on, the recurrent crises that culminated in 2008 suggest a serious mis-match between expectations and outcomes: a re-examination of the paradigm is in order. This book focuses on Milton Friedman’s formulation of the neoliberal doctrine, and analyses two aspects that were essential to turning it into a fully-fledged paradigm: the attribution of scientific status to positive economics, which led to informing public policies on the requirements of the market; and the characterisation of economic freedom as capable of promoting political freedom, which led to identifying free market with democracy.

The book exposes Friedman’s methodological argument for attributing positive economics scientific status as a failure, and his characterisation of economic freedom as a delusion; it identifies in the emergence as the mainstream in economics of the neoclassical synthesis, which borrowed from Walras’ the mathematical treatment of equilibrium but not the ethical and social framework in which it was inscribed, a development that facilitated the transition from the Keynesian to the neoliberal paradigm.

Dr. Mosini shows that the gigantic bail-outs carried out courtesy of the public purse, which institutionalised the practice of collectivising losses while keeping profits private, were no accident, but the consequence of the rethinking of the function of lender of last resort according to Friedman’s conception of rationality in relation to risk, combined with his interpretation of the 1930s recession. The book concludes that the neoliberal paradigm has served the interests of the economically powerful social strata it was designed to benefit extremely well, but that the deep, and deepening, injustice it has brought about calls for a complete rethinking of the paradigm of economics according to ethical principles respectful of human values. This book should be of interest to students and researchers of Political Economy, Economic Methodology, History of Economic Thought and Philosophy.

Introduction: Reasons for the Book  1. Friedman’s Essays in Positive Economics: Logical Consistency and Validity  2. The Singularity of Friedman’s Conception of the Positive-Normative Distinction  3. The Disappearance of the Normative Framework From Walras’ Economics  4. Friedman’s Method for Doing Positive Economics  5. Contradictions and Delusions of the Neoliberal Paradigm  6. ‘What is to be done?’ The Question Crops Up

Valeria Mosini is professor at the Science Faculty of University of Roma ‘La Sapienza’, Italy, and associate of the Department of International Development of the London School of Economics, UK.

‘Valeria Mosini not only drives another, solid nail in the coffin of neoliberal economics as the dominant, mechanically repeated prescription for progress, development and welfare that in actual fact does more harm than good; more importantly yet, she skilfully dissects and convincingly demolishes the empty claim to scientific status that its ideological protagonists and political advocates in the global north and south have managed to sustain for decades.’ - Eberhard Kienle, Political Sciences, CNRS, Paris and Grenoble, France

‘This extremely timely contribution by Valeria Mosini is an excellent read, relevant not just to economists and philosophers, but to anyone interested in both why we are where we are, and in what might be done about it. It focuses on the philosophical and political economy underpinnings of neo-liberal doctrine as formulated in particular by Milton Friedman. Mosini skilfully demonstrates the untenability of Friedman’s contribution, whilst arguing convincingly for the need to reformulate modern economics within an explicitly recognised ethically driven normative framework.’ - Tony Lawson, Economics, University of Cambridge, UK

‘In this well written and well argued book, Valeria Mosini indicts Milton Friedman for devising positive economics, the analytical method he used to smuggle in ideology disguised as theory and so provide an intellectual foundation to the neoliberal counterrevolution which has changed the world in the last 40 years. She exposes the whole process as fake science. After reading her closely argued strictures, it is hard to disagree with her.’ - Marcello De Cecco, Scuola Normale Superiore di Pisa, Italy

‘The monetarism of Milton Friedman has been much discussed over the years, but his methodology and philosophical attitude to economics have been less explored. Valeria Mosini has thus offered us an invaluable book. Wide-ranging, well-informed and balanced in its judgements, her work casts light onto Friedman’s instrumentalist and contradictory approach to economics. A particular strength of the book is the author’s command over the history of economic thought. Mosini has produced a penetrating critique of neoliberalism at a particularly opportune moment following the crisis of 2007-09.’ -

'Reassessing the Paradigm of Economics provides economists, both orthodox and heterodox, with much food for thought and constructs an original and challenging argument which specialists in methodology should grapple with' -E. Mariyani-Squire, Economic and Labour Relations Review,