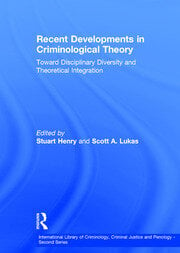 This volume contains recent and cutting-edge articles from leading criminological theorists. The book is organized into ten sections, each representing the latest in the multi-disciplinary orientations representing a cross-section of contemporary criminological theory. These sections include: 1: Classical and Rational Choice; 2: Biological and Biosocial; 3: Psychological; 4: Social Learning and Neutralization; 5: Social Control; 6: Social Ecology, Sub-cultural and Cultural; 7: Anomie and Strain; 8: Conflict and Radical; 9: Feminist and Gender; 10: Critical Criminologies: Anarchist, Postmodernist, Peacemaking. The articles were selected based on their contributions to advancing the field, including ways in which the authors of each chapter understand the current theoretical tendencies of their respective approaches and how they envision the future of their theories. Because of this, the articles focus on theory rather than empirical research. Of particular note is the tendency toward integration of different perspectives, as described by editors, Henry and Lukas, in their original introduction to this volume.