Reclaiming the Roman Capitol: Santa Maria in Aracoeli from the Altar of Augustus to the Franciscans, c. 500–1450 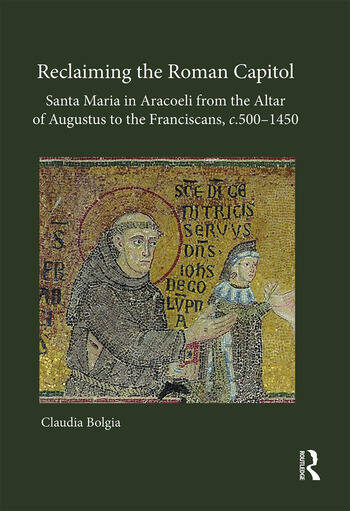 Reclaiming the Roman Capitol: Santa Maria in Aracoeli from the Altar of Augustus to the Franciscans, c. 500–1450

Prominently located on the Arx, the northern summit of the Capitoline hill, S. Maria in Aracoeli is the most significant medieval church of Rome to survive to the present day. Second major church of the Lesser Brothers or fratres minores in the Italian peninsula, and Roman headquarters of the Order, the Aracoeli played a vital role in the interaction between the Franciscans and the papacy, the friars and the laity, and the religious and civic authorities, as reflected in its art and architecture. On the basis of an interdisciplinary approach combining archaeological analysis with the finding of new archival evidence, reinterpretation of documents and literary and epigraphic sources, this book offers a reconstruction of the original church, its monuments and its Benedictine as well as eighth/ninth-century predecessors, which differs radically from earlier hypotheses. This reassessment in turn allows the author to revisit a number of major questions, including the Franciscans’ physical and theoretical appropriation of the past, the adaptation of an ancient site by a ‘modern’ religious order, the use and functions of space, the interaction between friars, laity and artists, and the contribution of the Roman Franciscans to the development of Marian devotion, thus shedding new light on the social, political and religious history of late-medieval Italy and its impact beyond the peninsula, from England to Bohemia and the Holy Land.

From Isis to Mary: The Arx and its surroundings from Antiquity to the Middle Ages

1 Before the Franciscans: The previous churches on the site

- Archaeological evidence from the earliest times to the thirteenth century

- The previous churches and their relationship with the Franciscan building

2 The Franciscan ‘appropriation’ of the Arx

- The Franciscans in Rome and their new headquarters

- The monument and its ‘meaning’

- The ara coeli ‘confessio’: Art for the Benedictines or the Franciscans?

- New and old cults before the construction of the new church

3 The New Franciscan Church: Between tradition and innovation

- An architectural analysis of the medieval building

- Transmission and reception of formal ideas: Artistic exchanges between Rome and England in the thirteenth century

- The magister principalis and the builders

- The deployment of Spolia and Franciscan ideas

- New and old cults in the new Franciscan church: paths for faithful and pilgrims

4 The ‘extended’ space of the Franciscan church: S. Maria in Aracoeli as a lived social and political place


- The ‘extended’ space of the church exterior

- The original side-entrance and the guardianship of the minors

- The ‘extended’ space of the church interior

- Burying in the Franciscan church

- Between ‘public’ and ‘private’ in the Rome of the popular regime: Francesco Felici’s icon tabernacle and family chapel (1372)

- Beyond Rome: the Legend of Augustus and the Aracoeli icon in Fourteenth- and early Fifteenth-century Siena

Claudia Bolgia is Senior Lecturer in History of Art at the University of Edinburgh. She has published extensively on medieval Rome and Franciscan Art and Architecture in a range of international peer-reviewed journals. Co-editor, with Rosamond McKitterick and John Osborne, of Rome across Time and Space: Cultural Translation and the Exchange of Ideas, c. 500-1400 (2011), her research has attracted major Fellowships, including Villa I Tatti – The Harvard University Center for Italian Renaissance Studies (2009–10), The British School at Rome (2012–14), CASVA – The Center for Advanced Study in the Visual Arts (2016–17), The Newberry Library (2016–17), and The Leverhulme Trust (2017–18).