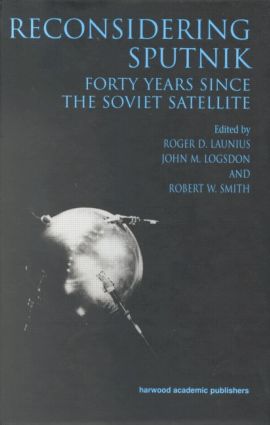 This book explores Russia's stunning success of ushering in the space age by launching Sputnik and beating the United States into space. It also examines the formation of NASA, the race for human exploration of the moon, the reality of global satellite communications, and a new generation of scientific spacecraft that began exploring the universe. An introductory essay by Pulitzer Prize winner Walter A. McDougall sets the context for Sputnik and its significance at the end of the twentieth century.

'This well-documented book is…highly recommended for all readers who want a balanced view of historical developments in the space race and its associated politics. All levels.' - W. E. Howard III, formerly, Universities Space Research Association (Choice)

Walter A. McDougall Introduction: Was Sputnik Really a Saltation?

Routledge Studies in the History of Science, Technology and Medicine

Studies in the History of Science Technology and Medicine aims to stimulate research in the field, concentrating on the twentieth century. It seeks to contribute to our understanding of science, technology and medicine as they are embedded in society, exploring the links between the subjects on the one hand, and the cultural, economic, political and institutional contexts of their genesis and development on the other. Within this framework, and while not favouring any particular methodological approach, the series welcomes studies which examine relations between science, technology, medicine and society in new ways, e.g. the social construction of technologies, large technical systems.