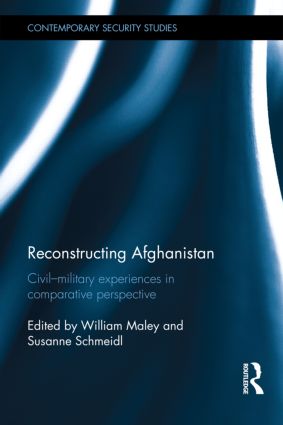 This book identifies some of the main lessons for civil-military interactions that can be derived from the experiences of Provincial Reconstruction Teams (PRTs) in Afghanistan.

The book has three main themes. Firstly, the volume analyses why the ways in which civil and military actors interact in theatres of operations such as Afghanistan matter — for both those categories of actors, and for the ordinary people who their interactions serve. Second, the book highlights that these interactions are invariably complex. The third theme, which arises specifically from ‘the PRT experience’ in Afghanistan, is that such teams vary significantly in their roles, resourcing, and operational environments. Consequently, to appraise the value of ‘the PRT experience’, it is necessary to unpack the experiences of different PRTs, which the use of case studies allows one to do.

The volume comprises an introduction, identifying some key questions to which the PRT experience gives rise, and case studies of the experiences of the United States, United Kingdom, New Zealand, Canada, The Netherlands, Australia, Germany and France; chapters dealing with the roles played by NGOs and the UN system and a discussion from an Afghan perspective of the implications of civilian casualties. It is the combination of the diverse cases discussed in this book with a focus on the broad challenges of optimising civil-military interactions that makes this book distinctive.

This book will be of much interest to students of the Afghan War, civil-military relations, statebuilding, Central Asian politics and IR in general.

William Maley is Professor and Director of the Asia-Pacific College of Diplomacy, Australian National University. He is author/editor of many books, including The Afghanistan Wars (2nd edn, 2009), Rescuing Afghanistan (2006), and Fundamentalism Reborn? Afghanistan and the Taliban (2001).

Susanne Schmeidl is Senior Consultant to The Liaison Office (TLO), and a Visiting Fellow at the Asia-Pacific College of Diplomacy, The Australian National University. She has been a Senior Research Fellow at Griffith University and a researcher at Swisspeace, and has published widely on refugee policy, statebuilding, and Afghan politics and society.