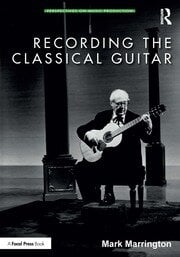 Recording the Classical Guitar charts the evolution of classical guitar recording practice from the early the twentieth century to the present day, encompassing the careers of many of the instrument’s most influential practitioners from acoustic era to the advent of the CD. A key focus is on the ways in which guitarists’ recorded repertoire programmes have shaped the identity of the instrument, particularly where national allegiances and musical aesthetics are concerned. The book also considers the ways in which changing approaches to recording practice have conditioned guitarists’ conceptions of the instrument’s ideal representation in recorded form and situates this in relation to the development of classical music recording aesthetics more generally. An important addition to the growing body of literature in the field of phonomusicology, the book will be of interest to guitarists, producers as well as students of record production and historians of classical music recording.

Narratives of the classical guitar in the 20th century

Chapter 2 The classical guitar in the early period of recording: Spain

The technological conditions of early recording

The recordings of Miguel Llobet

Spanish guitarists on the Regal label

The reception of Segovia's HMV recordings

Chapter 4 The classical guitar in the early period of recording: Latin America

Edison, Victor and the classical guitar in Cuba and Mexico

The eclectic roots of solo guitar recording in Brazil

Early post-war recordings and the transition to LP

Segovia at American Decca: redefining the classical guitar in the post-war period

The LP and the structure of Segovia's early recorded programs

Repertoire programming and evolution of the Segovian album concept

Segovia in the studio

Segovia's recordings and the aesthetics of High Fidelity

The foundations of the North American classical guitar marketplace

The recordings of the Spanish Music Center

The sound of Almeida's recordings

The classical guitar and American popular music and jazz

The emergence of the Brazilian classical guitar

The classical guitar in Mexico

Cuban perspectives on the classical guitar

Chapter 8 Nationalism and modernism in the recordings of Julian Bream

Early recordings for Decca and Westminster

Bream's quest for an acoustic aesthetic

Bream and the recording process

Chapter 9 Non-conformity in the recordings of John Williams

Recording and repertoire experiments after 1970

Crossover projects from Changes to Sky

The recordings of Siegfried Behrend and Anton Stingl

The assimilation of the Bream paradigm

The rise of the North American progressives

Populism in the recordings of Liona Boyd

Chapter 12 Retaining and revitalizing the tradition

Recording and the classical guitar transcription

Audiophile recording and the classical guitar

Chapter 13 Narrative threads since the 1990s

The consolidation of the progressive paradigm

The revival of the classical guitarist-composer

Classical guitar recording in Britain since the 1990s

Popular music and the canonisation of the Beatles

The canon upheld: the recordings of David Russell

The emergence of the specialist classical guitar recordist

Extensions of the audiophile recording aesthetic

Mark Marrington studied classical guitar as an undergraduate before training as a musicologist in the late 1990s and undertaking doctoral work focused on twentieth century British music and the composer Denis ApIvor. Later he became interested in record production and recording technologies leading him to a period of research into the impact of digital production tools (principally the Digital Audio Workstation) upon musical creativity in a number of genre contexts. This book is essentially a marriage of these two perspectives. Mark is currently Senior Lecturer in Music Production at St John University and his academic writing has been published Cambridge University Press, Bloomsbury Academic, Routledge, Future Technology Press, British Music, Soundboard, Classical Guitar, the Musical Times and the Journal on the Art of Record Production.