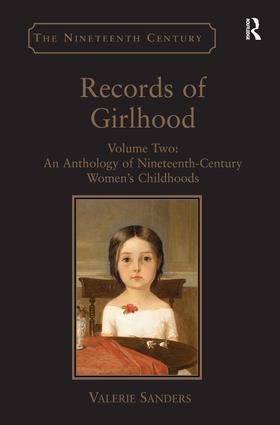 In this sequel to her 2000 anthology, Valerie Sanders again brings together an influential group of women whose autobiographical accounts of their childhoods show them making sense of the children they were and the women they have become. The fourteen women included juxtapose recollections of the bizarre with the quotidian and accounts of external events with the development of a complex inner life. Reading and acting are important themes, as is the precariousness of childhood, whether occasioned by a father's financial pressures or the early death of a parent. Significantly, most grew up expecting to earn their own living. The collection includes children's authors (Frances Hodgson Burnett and E. Nesbit), political figures (Emmeline Pankhurst and Louisa Twining), and well-known writers (Mary Elizabeth Braddon, Anne Thackeray Ritchie, Sarah Grand). Of relevance to scholars working in the fields of women’s autobiography, the history of childhood, and Victorian literature, this anthology includes a scholarly introduction and brief biographical sketches of each woman.

'Valerie Sanders's Records of Girlhood, Volume 2 is a worthy companion to its predecessor. Juxtaposing accounts of their childhoods by fourteen women born between the 1780s and the 1860s, Sanders's volume complements its highly readable texts with thought-provoking editorial material, including detailed annotations and lively introductory notes. The result is an accessible and varied tapestry of girlhoods that should be of interest to general readers as well as to scholars'. Claudia Nelson, Texas A&M University, USA ’…Sanders helps to illustrate how the relative formlessness of Victorian girlhood, represented from women’s adult vantage points, shapes both the recollection of and writing about them.’ Notes and Queries ’Valerie Sanders has chosen her memoirists - or rather her memoirs - with a shrewd and practised eye as to what specialists and non-specialists alike will fi nd most useful and enjoyable. … a charming insight into what it was like to be young, female and privileged (or, at least, not cold and hungry) two hundred years ago.’ The Brown Book

Valerie Sanders is Professor of English at the University of Hull, UK. Previous publications include a first Records of Girlhood collection (2000), The Brother-Sister Culture in Nineteenth-Century Literature: From Austen to Woolf (2002), and The Tragi-Comedy of Victorian Fatherhood (2009). She is currently a contributor to Pickering and Chatto’s Selected Works of Margaret Oliphant.