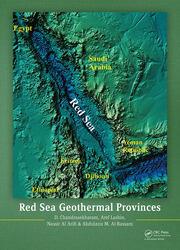 “Today, over two billion people in developing countries live without any electricity. They lead lives of misery, walking miles every day for water and firewood, just to survive. What if there was an existing, viable technology, that when developed to its highest potential could increase everyone’s standard of living, cut fossil fuel demand and the resultant pollution” said Peter Meisen, President, Global Energy Network Institute in 1997. Even though energy is available, technology was not matured enough to tap this energy in the nineties. Now, with the advancement of drilling technology, extracting heat from hot rocks has become a reality. Very soon when CO2 replaces the circulation fluid to extract heat from granites then both fossil fuel based and renewable energy sources will coexists balancing the CO2 emissions and providing energy, food and water security to the rich and the poor countries.

Red Sea rift represents the youngest spreading ridges in the world with a vast amount of heat energy stored on either side. The Red Sea is surrounded by countries with a weak economy. Developing a geothermal energy based economy in countries like Eritrea, Djibouti and Ethiopia will provide food and water security to these countries while for other countries, geothermal energy will help in mitigating greenhouse gas emissions. Although geothermal energy sources are available in all the countries since the opening of the Red Sea, millions of years ago, this was not brought to the light. Oil importing countries became highly dependent on the oil rich countries to sustain their economy and growth and thus remained poor.

This book unfolds the huge energy source, hydrothermal and EGS, for the benefit of the poor countries to reduce poverty and lift the socio economic status of these countries. The book deals with i) future energy demand, ii) CO2 emissions associated with fossil fuel based power plants, iii) black carbon emissions associated biomass energy source and iv) strategies to reduce CO2 emissions by using geothermal energy as energy source mix in all the countries—oil exporting and oil importing countries— around the Red Sea. The amount of energy available from hot granites in all the countries is well documented. EGS being the future energy source for mankind, this book will form the basis for future research by young scientists and academicians.

Availability of fresh water is a matter of concern for all countries. The only way to satisfy the thirst of a growing population, to meet drinking water demand and food security, is to depend on seawater. A large volume of CO2 is being emitted from desalination plants supported by fossil fuel based energy sources. This book describes the advantages of using geothermal energy sources for the desalination process to meet the growing water and food demand of the countries around the Red Sea. Oil rich countries, using its geothermal resources, can now reduce food imports and become self sufficient in food production.

This book gives hope for millions of children living in the underdeveloped countries around the Red Sea to satisfy their hunger and live a decent life with a continuous source of electricity, water and food available. This book ends with a note on the economic benefits of geothermal energy vs other renewables. With the signing of the GGA (Global Geothermal Alliance) by several countries during the December 2015 CoP 21 summit in Paris, policy makers and administrators will work together in implementing the necessary infrastructure and support to develop this clean energy source.