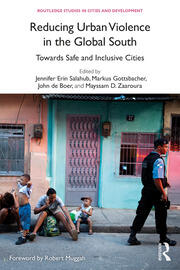 Reducing Urban Violence in the Global South: Towards Safe and Inclusive Cities

Reducing Urban Violence in the Global South seeks to identify the drivers of urban violence in the cities of the Global South and how they relate to and interact with poverty and inequalities. Drawing on the findings of an ambitious 5-year, 15-project research programme supported by Canada’s International Development Research Centre and the UK’s Department for International Development, the book explores what works, and what doesn't, to prevent and reduce violence in urban centres.

Cities in developing countries are often seen as key drivers of economic growth, but they are often also the sites of extreme violence, poverty, and inequality. The research in this book was developed and conducted by researchers from the Global South, who work and live in the countries studied; it challenges many of the assumptions from the Global North about how poverty, violence, and inequalities interact in urban spaces. In so doing, the book demonstrates that accepted understandings of the causes of and solutions to urban violence developed in the Global North should not be imported into the Global South without careful consideration of local dynamics and contexts. Reducing Urban Violence in the Global South concludes by considering the broader implications for policy and practice, offering recommendations for improving interventions to make cities safer and more inclusive.

The fresh perspectives and insights offered by this book will be useful to scholars and students of development and urban violence, as well as to practitioners and policymakers working on urban violence reduction programmes.

4. Towards safer communities: the impact of the Community Work Programme on the prevention of urban violence in South Africa Malose Langa, Themba Masuku, and Hugo van der Merwe

7. The contribution of informal institutionality to safe cities in Venezuela Roberto Briceño-León

8. Everyday violence in urban India: Is planning the driver or mitigator? Darshini Mahadevia and Renu Desai

is senior programme specialist with the Governance and Justice programme at the International Development Research Centre.

is managing director of the SecDev Group.

is the women’s rights knowledge specialist at Oxfam Canada.

"This impressive volume, the result of IDRC’s and DFID's Safe and Inclusive Cities initiative and undertaken with researchers from cities in the Global South, is unique in its presentation of in-depth original research results within a cross-regional, cross-discipline holistic framework. In this way, it fills a gap in knowledge of the urban violence-poverty-inequality nexus. The book brings together a remarkable range of individual case studies, focusing on such issues as social cohesion, exclusion, and gendered violence, with provocative—at times counter-intuitive—policy solutions. In demonstrating that the challenges of ubiquitous urban violence transcend borders and showing that resistance and resilience are fundamental local coping strategies, this path-breaking book is essential reading for academics, policymakers, and practitioners alike." — Caroline Moser, Emeritus Professor, University of Manchester, UK

"This second book based on research carried out under the Safe and Inclusive Cities initiative focuses its attention on interventions to address the extremely complex, diverse, layered, and often inter-connected forms of violence experienced in cities of the Global South. In a scenario where the state is often implicated as a perpetrator of violence and where social cohesion is frayed with groups pitched against each other as the chapters illustrate, interventions are bound to be embedded in the complexity of the violence and hence ‘imperfect’. But, there is a lot to be learned from them as works in progress.

One point that is clearly made is that safety and inclusion cannot be treated as independent arenas; they are linked. The sheer diversity of forms of interventions discussed here is amazing, ranging from grassroots interventions where the stakes and the roles of women and children in peace-keeping are asserted to state interventions such as livelihood and safety linking projects such as the Community Work Programme, community upgrading, and policing. Beyond the specifics of the interventions discussed, the value of the book is that it represents an analysis by researchers deeply engaged with their local contexts, and hence insights that are highly nuanced and appreciative of particularities, temporalities, and complexities. If the world must make a definitive movement towards attainment of the Sustainable Development Goals, listening to and reading these fascinating insights is a must for international, national, and local policymakers and all those interested in development dynamics."

"Reducing Urban Violence in the Global South: Towards Safe and Inclusive Cities, edited by Jennifer Erin Salahub, Markus Gottsbacher, John de Boer, and Mayssam D. Zaaroura, brings together ten chapters on problems and solutions to violence in some cities of the so-called Global South to understand their many similarities, but also their specific differences.

The world became urban in 2006 when, for the first time, more than half its population was living in cities. However, while this trend was not new for the developed world where urbanisation has now plateaued, Asia and Africa are urbanising at an impressive rate, as is Latin America. In line with this phenomenon, violence has urbanised or, in other words, it has a tendency to concentrate in cities. Typical urban violence has emerged, expressed through: occurrence in shared spaces (public and private); unequal access to services, equipment, and infrastructure; discrimination based on ethnicity, gender, age, or status as a migrant; and, illegal markets such as money laundering or trade in illicit substances, among others.

The proposal to build safe cities has arisen to confront urban violence in its duality: its concentration in cities and its urban specificity. This book helps address this double objective, examining the problem through case studies from Latin America, Asia, and Africa. Undoubtedly, this is a book that contributes to our knowledge of the problem of urban violence, but also to building urban coexistence through structural responses to inequalities, violence prevention policies, and community participation."