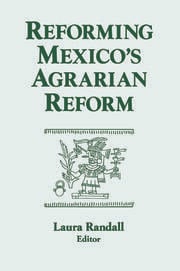 This work provides a survey and analysis of Mexico's agrarian reform, covering topics such as the agricultural provisions of NAFTA. The book also discusses the events in Chiapas that are crucial to Mexico's current political situation and the implications of reform for US-Mexican trade.

As the Soviet Union was collapsing in late 1991, reports began to reach the West about agents "shopping" for weapons systems - and weapons scientists - in the beleaguered Soviet military-industrial complex. In response, the United States, the European Community, and Japan, in cooperation with the Russian government, created a program to reemploy Soviet scientific personnel in civilian projects dealing with the legacy of the Soviet system - a polluted environment, unsafe nuclear power facilities, and economic underdevelopment. In this fascinating first-person account, the American environmental scientist who led the effort to establish the International Science and Technology Center in Moscow tells the diplomatic, scientific, and human story behind a remarkable post-Cold War conversion initiative.