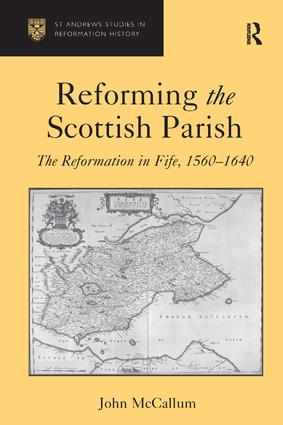 The Protestant Reformation of 1560 is widely acknowledged as being a watershed moment in Scottish history. However, whilst the antecedents of the reform movement have been widely explored, the actual process of establishing a reformed church in the parishes in the decades following 1560 has been largely ignored. This book helps remedy the situation by examining the foundation of the reformed church and the impact of Protestant discipline in the parishes of Fife. In early modern Scotland, Fife was both a distinct and important region, containing a preponderance of coastal burghs as well as St Andrews, the ecclesiastical capital of medieval Scotland. It also contained many rural and inland parishes, making it an ideal case study for analysing the course of religious reform in diverse communities. Nevertheless, the focus is on the Reformation, rather than on the county, and the book consistently places Fife's experience in the wider Scottish, British and European context. Based on a wide range of under-utilised sources, especially kirk session minutes, the study's focus is on the grass-roots religious life of the parish, rather than the more familiar themes of church politics and theology. It evaluates the success of the reformers in affecting both institutional and ideological change, and provides a detailed account of the workings of the reformed church, and its impact on ordinary people. In so doing it addresses important questions regarding the timescale and geographical patterns of reform, and how such dramatic religious change succeeded and endured without violence, or indeed, widespread opposition.

’In recent years, Scottish Reformation historiography has advanced remarkably, shifting the focus away from the once predominant focus of relations between the church and the state. A range of studies of ecclesiastical discipline and popular belief have added new dimensions to historians' understanding of the issues and processes involved in the religious changes of the early modern period. John McCallum's book on Fife makes a significant contribution to that corpus of work.’ Sehepunkte 'McCallum's study makes a number of important, even remarkable, observations.' Renaissance Quarterly 'Reforming the Scottish Parish is a distinguished contribution to Scottish Reformation studies - a distinction made all the more significant by the fact that it is its author's first book.' Scottish Historical Review 'As this work very successfully shows, the process of Reformation in Scotland was a much more gradual process than previously believed, and perhaps it is time for a more comprehensive study of that gradual process. McCallum's work is certainly an excellent starting point for such an endeavour.' Reformation and Renaissance Review ’This is local and regional religious history at its best when the careful compilation of the evidence can be placed securely within its geographical, political and social settings, and the conclusions are judiciously applied to wider questions. This book has made us wiser about the ways of Fife and Scotland and has added to the discussion of what makes a successful Reformation.’ Sixteenth Century Journal ’This well researched and statistically detailed account serves to reinforce the steady progress of the Reformation in Scotland beyond the simple paradigmatic definitions of slow� or fast.� … Frequent comparisons with continental trends enrich the study for historians of Scotland and equally make it a valuable read for scholars working beyond the Scottish context of this book.’ Journal of Modern History 'McCallum is