Reforming the State Without Changing the Model of Power?
On Administrative Reform in Post-Socialist Countries 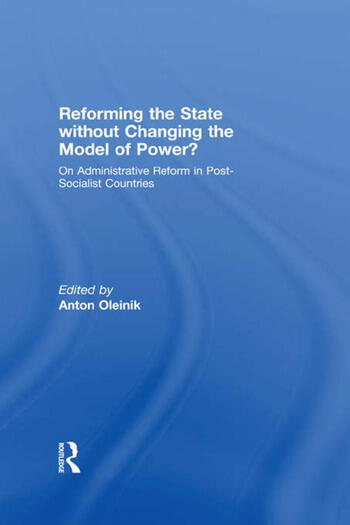 Reforming the State Without Changing the Model of Power?: On Administrative Reform in Post-Socialist Countries

This book places administrative reform in post-socialist countries in a broad context of power and domination. This new perspective clarifies the reasons why reforms went awry in Russia and some other post-Soviet countries, whereas they produced positive outcomes in the Baltic States and most East European countries. The contributors analyse the idea that administrative reform cannot produce sustainable changes in the organization of the state apparatus as long as it does not touch the underpinning model of power and domination. Using an interdisciplinary and comparative approach, the essays combine elements of philosophy, sociology, political science and economics, including a wealth of primary and secondary data: surveys, in-depth interviews with state representatives and participant observation. The book focuses on Russia and analyses recent developments in this country by the way of comparison with the experience of carrying out administrative reform in Ukraine, Bulgaria, Poland, Germany and North America.

This book was published as a special issue of the Journal of Communist Studies and Transition Politics.

Anton Oleinik is Associate Professor of Sociology at Memorial University of Newfoundland and Senior Research Associate, Institute of Economics, Russian Academy of Sciences.

Anyone interested in post-socialist politics can learn much from this book, which incisively distinguishes between government power as that over people from power to achieve goals. Primarily concerned with aspects of governance—administrative effectiveness and the rule of law—it also evaluates public opinion and social unrest toward failures in governance. Its eight original analyses are informed by empirical research that involves public statistics, sample surveys, in-depth elite interviews, and exacting taxonomies. Although focusing on Russian politics, the book draws comparisons with other post-socialist societies, primarily Poland and Bulgaria. The analyses are harsh but not without hope.

Richard Sakwa, Professor at the department of Politics and International Relations, University of Kent.

The authors faithfully describe new developments in political–administrative and social relations in post-socialist countries. They highlight national particularities in the systems of governance and show a rich potential of the innovative approaches illustrated with the help of the representative empirical data.