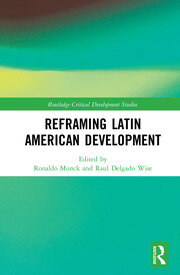 Since the year 2000 Latin America has been at the forefront of a series of diverse experiments with alternative forms, pathways and models of economic development and at the cutting edge of the international theoretical and political debates that surround these experiments. Reframing Latin American Development brings together leading scholars from Latin America and elsewhere to debate and discuss the current practice and futures of the Latin American experience with alternative forms of development over the last period and particularly since the end of neoliberal dominance.

The models discussed range from the neo developmentalism approach of growth with equity, to the Buen Vivir (How to Live Well) philosophy advanced by the indigenous communities of the Andean highlands and implemented in the national development plans of the governments of Bolivia and Ecuador. Other models of alternative development include the so-called socialism of the twenty-first century and diverse proposals for constructing a social and solidarity economy and other models of local development based on the agency of community-based grassroots organizations and social movements.

will be of particular interest to researchers, teachers and students in the fields of international development, Latin American studies and the economics, politics and sociology of development.

Part I: The Progressive Wave: Results and Prospects

Conclusion: Looking to the Future

Ronaldo Munck is Head of Civic Engagement at Dublin City University, Ireland and Senior Researcher at the Ernesto Laclau Institute for Interdisciplinary Studies of Latin America at the University of Buenos Aires, Argentina.

"This inspiring book, by reflecting on the experiences of Latin America’s "Progressive Wave" and of social movements like ‘La Vía Campesina" and the Zapatistas, which attempt to create a "post-neoliberal" world, makes a refreshing contribution to critical development studies." Cristóbal Kay, Emeritus Professor at the International Institute of Social Studies, Erasmus University Rotterdam, Netherlands

"Reframing the Development Question in Latin America is an excellent collection providing innovative insights into progressive and alternative strategies of development in Latin America. The book is a valuable and thought-provoking contribution to the literature on development, grass-roots social movements, and the failings of neoliberalism in the region."

"This book provides an extremely important contribution to the current debate on the process of transformative social change underway in Latin America. It is written by scholars who are at the cutting edge of current debates on alternative development thinking and practice. A must read for those seeking to move beyond the destructive forces of capitalist development."

James Petras, Professor (Emeritus), State University of New York at Binghampton, USA "Professors Munck, Delgado Wise and their all-star team have produced a book of critical importance for scholars of development and social change in Latin America and beyond. At a time when the world capitalist system is descending into crisis, the ‘Left turn’ in the region faces the challenge of rethinking development beyond extractivism, and the Right is on the move to reimpose the tyranny of the market, these essays provide thoughtful debate on the way forward for popular alternatives to a predatory global capitalism. Taken as a whole, they set forth a renovated critical development studies from a Latin American standpoint." William I. Robinson, Professor of Sociology, Global, and Latin American Studies, University of California at Santa Barbara, USA

"A welcome and refreshing coherent volume on diverse themes that explores progressive and critical development studies over the past twenty years, identifying new trends and updating debates on past and present issues." Ronald H. Chilcote, Edward A. Dickson Emeritus Professor of Economics and Political Science, University of California, USA