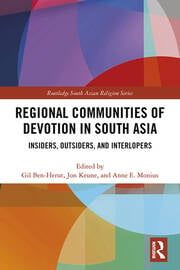 This book explores the key motif of the religious other in devotional (bhakti) literatures and practices from across the Indian subcontinent unmasks processes of representation that involve adoption, appropriation, and rejection of different social and religious agents.

The book reconsiders and challenges inherited notions of the bhakta’s or devotee’s other. Considering the ways in which bhakti might be conceived as having an inter-regional impact—as a force, discourse, network, mythology, ethic—the book critically engages with extant scholarly narratives about what bhakti is and traces when and how those narratives have been used. The sheer diversity of South Asia’s devotional traditions renders them an especially rich resource for examining social and religious fault lines, thereby furthering scholarly understanding of how communalism and sectarianism originate and develop on local or regional levels, with wider geographic implications.

Bringing together studies from a subcontinent-wide variety of linguistic, geographical, and historical frames for the first time, this book will be an important contribution to the literature on bhakti and will be of interest to scholars of South Asian Religions and Asian Religions.

Introduction, Gil Ben-Herut, Jon Keune, and Anne E. Monius; 1 From foolish ascetics to enemies of Śiva: the fate of Jains as religious others in Tamil Śaiva literature, Anne E. Monius; 2 Kālī dances into the cremation grounds of the Tamil land, Elaine Craddock; 3 Arguing with Vaiṣṇavas, annihilating Jains: two religious others in early Kannada Śivabhakti hagiographies, Gil Ben-Herut; 4 Bhakti Inc., Kerala: alienated selves and assimilated others, Rich Freeman; 5 The challenge of the swappable other: a framework for interpreting otherness in bhakti texts, Jon Keune; 6 The political field of bhakti at the emergence of Marathi literature in premodern India, Christian Lee Novetzke; 7 The Datta saṃpradāya and its others, Jeremy G. Morse; 8 Lost in the lake: Tulsīdās and his others, Philip Lutgendorf; 9 Are there atheists in potholes? Mīmāṃsakas debate the path of bhakti, Anand Venkatkrishnan

Gil Ben-Herut is Associate Professor of South Asian Religions in the Department of Religious Studies at the University of South Florida, US.

is Assistant Professor of South Asian Religions in the Department of Religious Studies at Michigan State University, US.

is a Professor of South Asian Religions at Harvard Divinity School, Massachusetts, US.