Regional Risk and Security in Japan
Whither the everyday 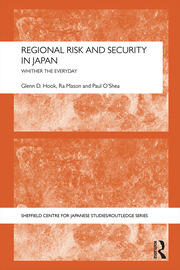 Regional Risk and Security in Japan: Whither the everyday

Japan’s unusual position in the realm of international politics encapsulates a three-fold juxtaposition: both in and out of Asia, both occupied by and a close ally of the United States, and both a key trade partner and a strategic rival of China. Whilst international relations theory offers a number of ways to analyse these relations, this book instead utilizes the concept of risk to provide an innovative perspective on Japan’s relations with China, North Korea and the US.

The book elucidates how risk, potential harm and harm are faced disproportionately by certain groups in society. This is demonstrated by providing an empirically rich analysis of the domestic implications of security relations with China, North Korea and the United States through the presence of US troops in Okinawa. Beginning with a theoretical discussion of risk, it goes on to demonstrate how the concept of risk adds value to the study of international relations in three senses. First, the concept helps to break down the boundaries between the international and domestic. Second, the focus on risk and the everyday directs us to ask basic questions about the costs and benefits of a security policy meant to secure the national population. Third, what implications do these two points have for governance? The question is one of governance as Japan’s externally oriented security policy produces domestic insecurity shared disproportionately, not equally, as this volume makes clear.

Glenn D. Hook is Toshiba International Foundation Anniversary Research Professor, School of East Asian Studies at the University of Sheffield, UK and director of the National Institute of Japanese Studies, part of the White Rose East Asia Centre, a collaboration between Sheffield and the University of Leeds, UK. His recent books include Japan’s International Relations: Politics, Economics and Security (co-author, Routledge, 2012, third edition).

is a lecturer in Asia-Pacific Studies at the University of Central Lancashire, UK, special research fellow with the Japan Society for the Promotion of Science at the University of the Ryukyus (2014–15), Japan, and an honorary fellow of the White Rose East Asia Centre, University of Sheffield, UK. His recent publications include Japan’s Relations with North Korea and the Recalibration of Risk (Routledge, 2014).

is an assistant professor of Asian Studies at Aarhus University, Denmark and an honorary fellow of the White Rose East Asia Centre, University of Sheffield, UK. He has recently co-edited a volume entitled Risk State: Japan’s Foreign Policy in an Era of Uncertainty (2015).

"(The book) provides an important linkage between the state and its people regarding security issues by utilizing the risk recalibration process. Thus, the idea of risk used in this book departs from previous studies on risk and treats it as ‘a heuristic device to illuminate how the recalibration of risk is manifested as harm to the security of the people’... this book is an important read not only for scholars but also practitioners who deal with these issues on a day-to-day basis." - Wakana Mukai, The University of Tokyo, Japan