Reification and the Aesthetics of Music 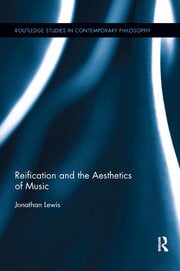 Reification and the Aesthetics of Music

This innovative study re-evaluates the philosophical significance of aesthetics in the context of contemporary debates on the nature of philosophy. Lewis's main argument is that contemporary conceptions of meaning and truth have been reified, and that aesthetics is able to articulate why this is the case, with important consequences for understanding the horizons and nature of philosophical inquiry. Reification and the Aesthetics of Music challenges the most emphatic and problematic conceptions of meaning and truth in both analytic philosophy and postmodern thought by acknowledging the ontological and logical primacy of our concrete, practice-based experiences with aesthetic phenomena. By engaging with a variety of aesthetic practices, including Beethoven's symphonies and string quartets, Wagner's music dramas, Richard Strauss's Elektra, the twentieth-century avant-garde, Jamaican soundsystem culture, and punk and contemporary noise, this book demonstrates the aesthetic relevance of reification as well as the concept's applicability to contemporary debates within philosophy.

Jonathan Lewis is a College Supervisor at the University of Cambridge, UK

"In this lucidly written and blistering critical work, Lewis demonstrates how, on the one hand, the metaphysical assumptions of analytic aesthetics reify artworks into objects forever independent from the communities and histories in which they have their life; while, conversely, postmodernism’s relativism empties aesthetic experiences of their claims to truth and meaning as forms of world disclosure. In steering a clear path between musical objectivism and musical subjectivism, Lewis adds a potent chapter to the resurgent debates in the aesthetics of music. A more than welcome addition to contemporary aesthetics." – Jay M. Bernstein, New School for Social Research, USA

"With this engaging, provocative, and timely book Jonathan Lewis takes his place as one of a group of scholars in philosophical aesthetics that are both richly aware of developments in the other areas of philosophy and so see aesthetics in that larger philosophical frame of reference, and at the same time are fully trained in music as well as philosophy, so that the discussion, as it extends into music from philosophy and back is grounded in the world of actual artistic practices. With the ability to move with equal expertise from philosophy into the musicological debates of recent decades, this informed study shows that what Lewis discusses as the reification of the musical work has supported a project in ontology, asking what special or distinctive kind of thing a work of music is – where "a work of music" is understood as being a pure entity that transcends its performance contexts and the actual sound-making history and circumstances of its multiple performances. Lewis’ approach sees this as a kind of pseudo-problem – one emergent from a false presupposition concerning what must be the case independent of the embodied realities of performance. And rather than arguing abstractly against abstraction, his musical background allows him to reach variously into the Wagner debates, into the conceptual battles concerning "noise music" of recent decades, and into numerous further examples displaying a cultivated awareness of the kind of real musical detail that the field needs. A lively, interesting, clarifying, and stimulating contribution to our understanding of what art is and why it matters." – Garry L. Hagberg, Bard College, USA

"Lewis’ study is a valuable contribution to current attempts to bridge the gap between analytic philosophy and continental philosophy through a discussion of aesthetics and art. This is a growing field of study and the monograph offers an insightful and timely elaboration of many of the problems in contemporary philosophy through a new account of the notion of reification" – Camilla Flodin, Uppsala University, Sweden